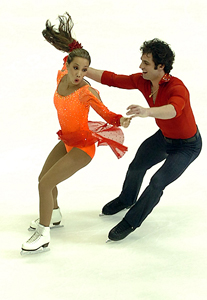 Keauna McLaughlin and Rockne Brubaker survived the hype of repeating as champions but the pressure showed in the performance of the Colorado Springs, Colo., based team. Their “West Side Story” had two major errors.

“We had a few mistakes. But this week everyone has been saying to me ‘You can win five years in a row but the second year is always the hardest, to come back and to do it for the first time,'” Brubaker said.

Caydee Denney and Jeremy Barrett, the surprise short program leaders who teamed up in June, finished second overall with 176.27 points to McLaughlin and Brubaker’s 178.76.

“I thought first is great but second is like ‘Wow, that’s awesome.’ I still can’t believe it,” said Denney. Pending selection Saturday night from U.S. Figure Skating, she will likely be a World Championship team member after one career appearance at nationals.

“We didn’t have any expectations coming into nationals so to skate two programs that we thought were pretty good, and to finish second, is fantastic,” Barrett said. “We’re happy with how we did. I think we fought for everything.”

Olympians Rena Inoue and John Baldwin, twice the national champions, finished third with 171.08 after an uninspiring free skate. They had problems from their first element, side-by-side triple toes that Baldwin under rotated.

Amanda Evora and Mark Ladwig received a standing ovation for a free program that lifted them from sixth to the pewter medal. So thrilled by finally skating a clean performance, which included a Level 4 lift valued at a competition high 8.15 points, Evora was in tears before she left the ice.

“We’ve been together seven years and everyone’s always wanted us to skate a good program. Everyone wants us to do well,” she said. “To be able to do that in front of such a great audience, it meant so much to me. It’s like a dream come true.”

After a spectacular opening triple twist, Brubaker performed a triple-single instead of the planned triple Salchow-double toe combination. She fell on their next jump, side-by-side triple toe loops.

“There were definitely moments in my program that I thought, ‘I can’t do this, just let me stop, just let me have a breather, just let me have a trash can,'” said McLaughlin, who has been battling illness for five days. “But I just kept going. I don’t know how I did it, but I got through it and I’m really happy that it’s over with.”

The pair was spot on in their pairs elements including a throw triple Salchow and throw triple loop that earned all positive grades of execution from all the judges. Near the very end of their performance, McLaughlin and Brubaker also performed a lift that earned them 8.01 points, making it more valuable than any other trick in their skate.

Later, Denney and Barrett closed the show with a near flawless program that was less difficult than McLaughlin and Brubaker’s. The highlights included their opening triple twist, which earned them 6.8 points and a lift near the end of the program that earned 6.81.

Brooke Castile and Ben Okolski finished fifth overall. After winning the 2007 U.S. Championship, Castile has struggled with injuries, including one that forced them to miss four weeks in November and December, and it showed in Cleveland.

“We practiced great here -we’ve been practicing great at home,” Castile said. “It’s just we haven’t competed more than four times in the last three years. I feel like I need more time in competition to get my legs the way they need to be.”

She fell on a jump in the short program and another, the attempted side by side triple Salchows, in the free skate. Castile and Okolski also had a point deducted for going over the time limit.

Chloe Katz and Joseph Lynch (156.15) were sixth overall while Caitlin Yankowskas and John Coughlin (153.67) dropped from fourth to seventh. They finished eighth in a program highlighted by Level 4 lifts and spins but marred by a triple toe-single toe combination and single axels.

In ice dance, Meryl Davis and Charlie White brought the crowd to their feet with a technically demanding free dance that secured the national crown by more than 20-points. It is their first U.S. Championship win.

“It’s kind of surreal right now,” said Davis, who won Skate Canada, finished third at Cup of Russia and the Grand Prix Final before coming to Cleveland. “We’ve been dreaming of this for years. It’s surreal, but it’s amazing nevertheless.”

With five-time U.S. Champions Tanith Belbin and Ben Agosto out of the competition because of an injury, Davis and White, far more experienced than the field in Cleveland, could have held back. But they performed world class in every respect.

“We feel really good about our performance,” Davis said after their Camille Saint-Saens free dance. “We put everything we had out there and left everything out there on the ice.”

Their performance was highlighted by a Level 4 curve lift and rotational lift combination, which gave them 10 points, the highest value received in the entire free dance. A beautiful midline step sequence near the end of the program was also a crowd pleaser.

Reigning World Junior Champions Emily Samuelson and Evan Bates won the silver medal with 181.64. The team had a bobble on their combination spin but otherwise received positive marks in the free skate.

Kim Navarro and Brent Bommentre were third with 176.30. The pewter medal went to Madison Hubbell and Keiffer Hubbell, who finished fourth in every portion of the competition for 171.51.