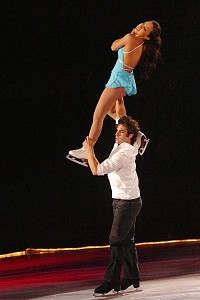 Keauna McLaughlin and Rockne Brubaker could have crumbled after three mistakes early on in their Rostelecom Cup free skate. But the two-time U.S. Champions proved their mental toughness, finishing the program with a late throw triple loop that helped them to a bronze medal overall.

China’s Qing Pang and Jian Tong, the 2006 World Champions, easily won the competition with 191.33 points to Yuko Kavaguti and Alexander Smirnov of Russia’s 180.14. McLaughlin and Brubaker received 160.55 putting them ahead of the second Russian team Vera Bazarova and Yuri Larionov (156.28).

With their new program to music from the Slumdog Millionaire soundtrack, McLaughlin and Brubaker finished fifth with 99.12, which included a one point deduction for her fall on the throw triple Salchow. She also fell on the triple Salchow in the opening side-by-side combination and under rotated the double axel.

“We had a rough skate,” said McLaughlin, who was throw sky high in the team’s Level 2 triple twist. “I am definitely disappointed in myself. Thankfully my partner was there for me and he was stable and I could count on him.”

The pair performed only a Level 1 death spiral but their spins and spiral sequence were Level 4.

The Rostelecom bronze extended their streak of medal winning performances in regular season Grand Prix events to five. At 2007 Cup of China, McLaughlin and Brubaker made their senior debut with a silver medal, and have won medals since at 2007 NHK Trophy, 2008 Skate America and 2008 Skate Canada.

Skating to “Impossible Dream” by Joe Hisaishi, Pang and Tong performed double axel-double axel sequence, a triple throw loop and a throw triple Salchow. She doubled the planned side-by-side triple toe loops but the rest of the program was solid.

“Today’s performance was OK,” Tong said about their first place free skate. “There some errors  but this is our first competition and so we are still very pleased with what we did today.”

Kavaguti and Smirnov’s only error came when she put her hand down on the first jump in the triple toe-double toe sequence. Their highest scoring element, earning them 7.55 points, was the Group 5 axel lasso lift, which received a Level 4.