With six days remaining until the Opening Ceremony of the 2010 Olympic Winter Games in Vancouver, Canada, Figure Skaters Online is highlighting Olympic moments to remember from the sport of figure skating. 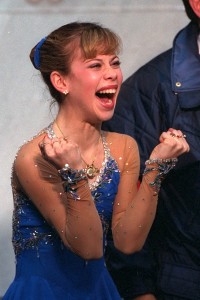 On Feb. 20 at the 1998 Olympic Winter Games in Nagano, Japan, 15-year-old Tara Lipinski became the youngest Olympic figure skating champion in history, beating teammate Michelle Kwan in a breathtaking duel for the gold.

“It felt so great, I can’t even explain it,” said Lipinski, who is also the youngest World Champion on record. “Knowing against all odds, under all that pressure, you did it. I will always remember it.”

Skating to “Lyra Angelica,” the same free skate that helped her reclaim her national title just weeks earlier at the 1998 U.S. Championships, Kwan received all 5.9s for artistry in Nagano. But she had a shaky landing on her triple flip, which was likely the difference between gold and silver.

“I knew this competition was not a piece of cake,” a teary Kwan said afterward. “I came out of the rink feeling like I had done my best. There is nothing more I could have done. I truly know that. It might not be the color medal I want, but I will take it.”

It was the first 1-2 American finish since Tenley Albright and Carol Heiss in 1956.

At the 2010 Olympic Winter Games in Vancouver, Canada, the U.S. will be represented by 2010 U.S. Champion Rachael Flatt and silver medalist Mirai Nagasu, who also won the 2008 U.S. Championship. Both beat out Sasha Cohen, the 2006 Olympic silver medalist, who started and ended her quest for a third Olympics with a fourth place finish at nationals.

Unlike Kwan and Lipinski, who held the 1996 and 1997 World titles, respectively, neither Flatt or Nagasu head into the Olympics with a World Champion under their belt. Flatt was fifth at the 2009 Worlds. She also finished first at the 2008 World Junior Championships, where Nagasu was third.

Olympic moments to remember: Hughes in 2002