After opening her free skate with a solid double Axel, Miller landed four triple jumps, including two in combination, during her performance to “Piano Fantasy” by William Joseph. Miller also executed three Level 4 spins, the flying sit spin, the layback spin and the change foot combination spin, and a Level 1 step sequence.

“I was happy that even after I made a mistake on the first Lutz, I was able to add a combination on to the second triple Lutz,” she Long, who underrotated her solo triple loop.

Bell only performed two triple jumps in her free skate to Andrew Lloyd Webber’s Cats. After landing a triple toe and a triple Salchow early in the program, Bell encountered a major error she performed a single toe instead of her planned triple toe-double toe. She received only .31 for the jump.

Hoffman landed one triple jump and eight doubles to move from ninth to fourth.

Chen’s free program featured six triple jumps, including a triple Lutz-double toe combination, triple Lutz, triple loop and a triple Salchow-double toe, giving him 110.93 points for the performance. Moeller and Phengsy each landed three triples while Bjelde, who was second in the free skate, landed four, moving him from fifth to the podium. 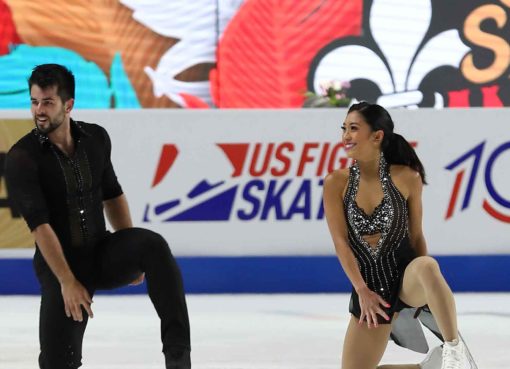