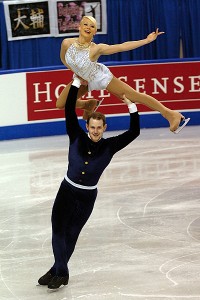 Beginning their career together in 2008, Yankowskas and Coughlin enjoyed their most successful season in 2010-11. Their campaign began with a fourth-place finish at the NHK Trophy, followed by a bronze-medal showing at the Cup of China, marking their first podium finish in the International Skating Union (ISU) Grand Prix of Figure Skating Series. They went on to capture their first U.S. title in January before finishing fourth at the 2011 ISU Four Continents Figure Skating Championships in February.

Most recently, Yankowskas & Coughlin placed sixth at the 2011 ISU World Figure Skating Championships in Moscow. Their finish at the World Championships was the highest by an American pairs team since Rena Inoue and John Baldwin placed fourth in 2006.

“Emotionally, this has been a roller-coaster year for us,” Coughlin said. “Our finishes on the Grand Prix circuit and at the U.S. Championships and Worlds are something we are very proud of together and will cherish always.”

Coughlin lost his mother, Stacy, to a chronic respiratory illness in February, 2010. The team dedicated the 2010-11 season to her memory, most notably performing their free skate to “Ave Maria,” a program they rode to several career-best finishes.

“I will forever cherish the memories and successes that John and I had together,” Yankowskas said. “I respect and support John unconditionally with his future endeavors.”

Yankowskas will search for a new partner, while Coughlin will evaluate his options before making future plans. He plans to stay involved in skating.

“We would like to thank our coach, Dalilah Sappenfield, and her support team for their tireless effort,” Yankowskas and Coughlin said. “Without our friends, families and fans, we would not have enjoyed such a successful career.”

“I am grateful to have had the opportunity to work with Caitlin and John,” Sappenfield said. “I respect their decision and look forward to supporting them both in any way possible as they move forward.”