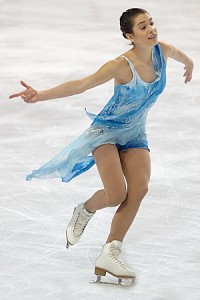 After contemplating retirement from competitive skating early last year, reigning U.S. Champion Alissa Czisny (Bowling Green, Ohio) heads into Ontario, Calif., as the favorite for the Skate America ladies title. She is coming off her most impressive season to date, which saw her take the gold medals at Skate Canada, the Grand Prix Final and the U.S. Championships, win bronze at Trophee Eric Bompard and place fifth at the Four Continents Championships and the World Championships.

Although Czisny is poised to win Skate America on her third attempt (she finished second in 2005 and fourth in 2004), she will face competition from Italy’s Carolina Kostner. A three-time World Championship medalist, she was extremely successful last season, medaling in each event she entered. She placed first at Gardena Spring Trophy, NHK Trophy and the Italian Championships, second at the Grand Prix Final and European Championships, and third at Skate America and Worlds.

With both Czisny and Kostner making their season debut in Ontario, predicting the outcome is difficult, as both have been known for following moments of triumph with inexplicably bad performances. And both are coming into Skate America following a long season that saw them competing through May (as the World Championships were moved from Tokyo to Moscow because of this year’s devastating earthquake). Kostner’s personal best 184.68 points from the 2008 World Championships is higher than Czisny’s 182.25 from last year.

Both will also face challenges from other inconsistent forces including Georgia’s Elene Gedevanishvili, the 2010 European Championship bronze medalist who won the silver medal at Nebelhorn Trophy to kick off this season, Russia’s Ksenia Makarova, who was second at 2010 Skate Canada and fourth at the European Championships, and the United States’ Caroline Zhang (Coronoa, Calif.), a three-time World Junior Championship medalist who won bronze medal at the 2009 U.S. Championships but failed to crack the Top 10 the last two years. Zhang was third at 2007 Skate America and third at 2008 Trophee Eric Bompard.

American Joelle Forte (Merrick, N.Y.) is making her Grand Prix debut at Skate America following a ninth place showing at the 2011 U.S. Championships. Earlier this season, she was seventh at Nebelhorn. She was fourth at 2011 Gardena Spring Trophy as well.