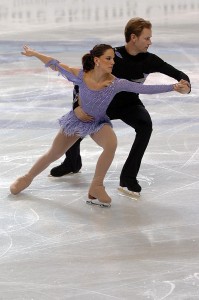 Caydee Denney and John Coughlin, appearing in their second competition since forming a partnership earlier this year, finished second in the short program to 2006 Olympic silver medalists Dan Zhang and Hao Zhang (62.85 points) Saturday at Skate America in Ontario, Calif. Russian’s Vera Bazarova and Yuri Larionov finished third with 56.62 points, the same score garnered by Denney and Coughlin but had a lower element score.

“We felt really good,” Vise said. “We had a good day today and we finally felt the ice a little more than we have the past couple days and we were calm and having fun out there.”

“Actually I had a couple of injuries last year,” Hao said. “My hand, my shoulder and my knees. I’ve been skating for three months now and really training for one and a half months. My health is not really the best.”

Denney (Ocala, Fla.) and Coughlin (Kansas City, Mo.) also received all positive GOEs for their program set to East of Eden. After opening with a triple twist, the pair performed side-by-side triple toes and later a throw triple Lutz. Their step sequence, lift and spin were all Level 4 while their death spiral was Level 3.

“We’ve been working really hard and training to get these programs as automatic as we can in the short amount of time that we’ve been together,” Denney said. “But we feel really comfortable out there together.”

Performing to “Singing in the Rain, Marley and Brubaker’s performance was highlighted by side-by-side triple toes. Their triple twist and a throw triple Lutz, which Marley put her hand down on, received negative GOEs.

“We still have a lot to improve on throughout the entire season, but it’s still fairly early, so we want to go back and really look at our levels and see how they are calling some of our elements and make adjustments,” Brubaker said.

Vise and Baldwin started their program with a double twist and followed that with a throw triple loop, which received a negative GOE. Their side-by-side triple toes were clean.