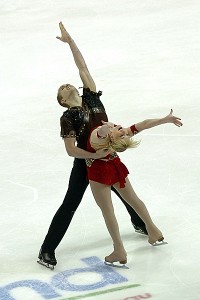 Caydee Denney and Jeremy Barrett may be new to the Grand Prix circuit but Friday at the NHK Trophy in Nagano, Japan, the team skated like they had been a part of the series for years.

The U.S. silver medalists, making their career Grand Prix debut, are currently in third place behind Russians Yuko Kavaguti and Alexander Smirnov, who are first with 68.90 points, and China’s Qing Pang Jian Tong (67.30). Two-time U.S. Champions Rena Inoue and John Baldwin, currently ranked third in the country, are fourth with 52.52.

“This is our first Grand Prix ever and we felt great,” Barrett said. “We just switched to this program about a month ago. We started out with a different program earlier and it wasn’t quite working for us, so we switched to ‘Firebird’ and I think it suits us much better. It was a good start today, but there is still a lot of work to do.”

Skating first out of eight pairs, Denney and Barrett were near flawless in their program, performing a triple twist, triple toeloop, throw triple Lutz and a Level 4 spin. The pair lost points on their backwards outside death spiral, which received only a Level 1.

It was a season best for Kavaguti and Smirnov. To the music of “The Swan” by Camille Saint-Saens, the reigning European Championship silver medalists and World Championship bronze medalists landed side-by-side triple toes, a throw triple loop and a triple twist. Awarded a Level 4 for their spins and lift, Kavaguti and Smirnov received a Level 3 death spiral and footwork.