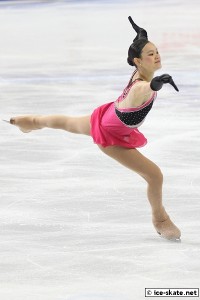 Ladies
Lam (Bellflower, Calif.) hopes to improve on her bronze medal finish at Junior Grand Prix Australia by joining Courtney Hicks, the JGP Australia Champion, as the only American women to win a Junior Grand Prix event this season. Prior to this season, Lam had competed only once internationally, claiming the gold medal at 2010 JGP Czech Republic with 156.41 points. She made her senior debut last season at the U.S. Championships, placing seventh, one spot higher than her placement in the junior event at the 2010 U.S. Championships.

To win in Austria, Lam will have to contend with two other medalists from this year’s circuit, China’s Zijun Li and Russia’s Polina Agafonova, who won the silver and bronze medals, respectfully, in Latvia. At this event last season, Li won the bronze medal. She was also fourth at 2010 JGP Czech Republic. At the 2011 World Junior Championships, Li placed ninth.

While Li has held steady in the rankings, Agafonova is on the comeback trail following a disappointing 2010-11 season that saw her place fourth at JGP Germany, seventh at JGP Austria and miss the cut for the World Junior Championships. She won the 2009-10 Russian Junior Championships and finished third at 2010 Junior Worlds.

Katarina Kulgeyko (San Diego, Calif.) of the United States is making her JGP debut in Austria. Following her bronze medal in the junior ladies event at the 2011 U.S. Championships, she placed second in the junior event at Gardena Spring Trophy. Kulgeyko could contend for a medal along with Miu Sato of Japan who finished just off the podium at her debut in Poland.

Lam’s bronze medal winning score of 145.48 in Australia is higher than marks set by Li and Agafonova this season. While she may trail after the short, Lam has a solid free skate that can put her on top. Podium predictions: 1) Vanessa Lam, United States. 2) Polina Agafonova, Russia. 3) Zijun Li, China.

Men
The men’s event in Austria has one of the toughest line-ups of the season. Six skaters have realistic opportunities to medal: Dolensky (Kennesaw, Ga.),  Canada’s Liam Firus, Russia’s Gordei Gorshkov, Japan’s Keiji Tanaka, China’s Han Yan and China’s He Zhang. And whoever finds themselves off the podium will likely find themselves out of the JGP Final.

Tanaka won the silver medal at the 2011 World Junior Championships. Heading into Innsbruck, he already has a silver medal on the circuit, coming from JGP Australia. Zhang also won a silver medal in his opening event of the season, Latvia. Both Dolensky and Firus both started their seasons with bronze medals.

In addition to these medal winners, two skaters are kicking off their season and could easily start their year with a podium performance. Yan is the reigning JGP Final silver medalist. Last season, he won gold in Austria and the Czech Republic. He also won gold in Turkey the year before. With a personal best 193.62 points, he is capable of competing at a high level.

Gorshkov is also starting his season in Austria. He placed ninth at World Juniors earlier this year. On the 2010-11 season, he won silver in Germany, finished fourth in Japan and then placed eighth at the Final.

While those six skaters have the goal of winning a medal that will eventually lead them to the Final, Warren (Riverside, Calif.) is looking to improve on his sixth place debut in Australia. He won the silver medal in the junior event at 2011 Gardena Spring Trophy.

Tanaka not only has the highest personal best in the competition (196.98 points from the World Juniors), he also has the momentum of already starting his season with a silver medal. 1) Keiji Tanaka, Japan. 2) Han Yan, China. 3) Gordei Gorshkov, Russia.

Pairs
The pairs competition in Austria will feature a rematch of China’s Wenjin Sui and Cong Han, the champions from JGP Latvia, and their country mates Xiaoyu Yu and Yang Jin, who won the silver in Latvia. Canada’s Margaret Purdy and Michael Marinaro, who are also competing in Innsbruck, won the bronze medal behind those two pairs.

In the 2009-10 season, Sui and Han were golden, taking the top prize not only at their national championship but golds at JGP Belarus, Germany and the Final as well as the World Junior Championships. Last season, the team split their time between junior and senior internationals. They won gold at JGP Germany but were second in Austria. Sui and Han did not compete at the JGP Final because they competed at the senior Grand Prix Final, where they were third. The team was second at Cup of China and third at Skate America. Their season was capped off with a second consecutive World Junior title.

Yu and Jin are building won the gold medal at JGP Czech Republic last season and also claimed the bronze in Austria, the same standing they had at the Final. While Yu and Jin look to have a lock on silver, Purdy and Marinaro are not a lock for the bronze.

Klara Kadlecova and Petr Bidar of the Czech Republic are looking for their first JGP medal. They pulled double duty last season, competing as both juniors and seniors internationally. Kadlecova and Bidar were seventh at the 2011 European Championships and 15th at Worlds. At World Juniors, they were eighth.

All three American teams are also hoping to pose a threat but were only seventh, eighth and ninth in Latvia. The American contingent is lead by Oltmanns (Shakopee, Minn.) and Santillan (Glendale, Calif.), who were 11th at JGP Austria last year but improved to seventh in Riga. At the 2011 U.S. Championships, the team was 11th in the junior pairs competition. They finished sixth as novices in 2010.

Denney (Ocala, Fla.) and Frazier (Colorado Springs, Colo.) rejoined this season after skating together 2005-08. In Latvia, they were eighth, coming in just ahead of Duarte (Cumberland, R.I.) and Grafton (North Attleboro, Mass.) the most experienced of the three American pairs. The team was ninth at JGP United States, their lone assignment in 2009, and finished fifth at 2010 Great Britain and seventh in Czech Republic. Duarte and Grafton were seventh in junior pairs at the 2011 U.S. Championships and claimed pewter as novices in 2010.

Sui and Han won their first event of the season with a less than spectacular performance. Even if they perform less than their best, they should still take the gold. Podium predictions: 1) Sui Wenjing and Han Cong, China. 2) Yu Xiaoyu and Jin Yang, China. 3) Klara Kadlecova and Petr Bidar, Czech Republic.

Ice Dance
Russians Victoria Sinitsina and Ruslan Zhiganshin started their season with a victory at JGP Poland while Canadians Nicole Orford and Thomas Williams won in Australia. Maria Nosulia and Evgen Kholoniuk of Ukraine claimed the top spot in Latvia. All three teams are in Innsbruck looking for a second gold medal.

With three gold medalists in the hunt, it will be tough for others to step onto the podium. But Aldridge (Birmingham, Mich.) and Eaton (Bloomfield Hills, Mich.) are looking to add a medal to the bronze they claimed in Latvia. They made their JGP debut last year in France, finishing sixth, and then they improved to fourth in Great Britain. They are the 2010 U.S. Novice Ice Dance Champions and were fifth at the 2011 U.S. Championships in junior dance.

Czech Republic’s Karolina Prochazkova and Michal Ceska were fourth in Latvia. In Innsbruck, they are looking to make the podium for the first time on the JGP.

With a score of 140.31 points in Poland, Sinitsina and Zhiganshin have the highest score of the season, coming in more than 15 points higher than the other gold medal winning scores. They can easily win even with mistakes. Podium predictions: 1) Victoria Sinitsina and Ruslan Zhiganshin, Russia. 2) Nicole Orford and Thomas Williams, Canada. 3) Maria Nosulia and Evgen Kholoniuk, Ukraine.