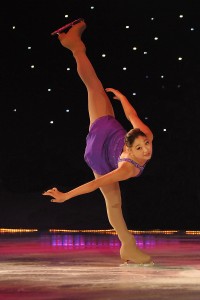 Mirai Nagasu may be a national champion and Olympian, but the most important thing on her mind right now isn’t a blade, but a wheel–or, rather, a set of them. “I need a car!” Nagasu laughs, proving that her fun and outspoken personality can withstand just about anything, even the flu she’s battling. “I’m doing better, now that I’m on Tamiflu, but get flu shots!”

Five years ago, Mirai Nagasu made history by becoming one of the youngest US National Champions ever. She’s one of only two women to win Junior and Senior National Titles in consecutive years (the other is Joan Tozzer). She was also a member of both US Junior World teams to sweep 2007 and 2008 Junior World podiums (she won a silver and a bronze). In 2010, she won the silver at Nationals and punched her ticket to the Vancouver Olympics. She finished fourth there–the highest of any US lady, and solidified her reputation for skating with beauty. The next month, she led after the short program at Worlds; later that year, she won her first Grand Prix medal, a silver, at Trophée Eric Bompard. In 2011, she placed 3rd at the Four Continents Championships.

However, to skating fans, Nagasu was also going through a rough time: she missed the Worlds teams in 2011 and 2012, and reports surfaced that she commuted two hours to and from her rink each day. The concerns hit Mirai, too, and she decided to make some changes to her skating life. She parted ways with Frank Carroll, her coach of three years, and began training with Wendy Olson and Amy Evidente.

The change suits her. She explained that, “of course I have my down moments, but ever since I changed coaches, I feel like I have such a strong support team around me. I’m a happier person.” Now, on the brink of the five-year anniversary of her National Title, the upbeat Mirai sat down to discuss her skating goals, her new philosophy on skating, and her post-skating plans.

I  recently heard someone say that she can’t believe that it’s been five years since little Mirai Nagasu was U.S. Champion.
[laughs] Yes, that was a long time ago.

What keeps you skating?
I just love it and there’s so much more I want to do with it. I’m not ready to walk away yet. Even though it’s been five years since I was National Champion, it’s something to keep working towards. I know it sounds cheesy, but it’s really about the journey, and I just hope I can rekindle that passion…well, I still have the passion, but I hope I can rekindle winning. I just have to keep working toward it.

You have such a fun personality off-ice, but your passion on-ice is such a different thing. How do you maintain the two different personas?
I don’t know. Skating is a part of me, but it doesn’t define who I am. I’m still my own person, and I still hang out with friends. Hopefully, I have a sense of humor. I hope I can still enjoy things. It sounds like an oxymoron, but I want skating to be part of me, but not to be the whole thing that defines me. I hope that makes sense. It makes sense to me.

A lot of young athletes are very media-savvy and have carefully-crafted answers for each question, but you speak so naturally.
Thank you. People tell me I don’t have a filter. They try to help me with how I answer questions, but when I talk to people, I try to talk to them like they’re normal people. I try to remain positive–I want to be who I am and still remain a role model to others.

You’re coming up on the next Olympics.
Yes…

Being an Olympian makes you an automatic role model: Americans put Olympians on a high pedestal, and I assume other cultures treat their Olympians the same way.
True, true.

So, are you hoping to find your way back onto the World and Olympic teams this year and next?
It would be an honor to represent my country again on both the Olympic and World stages, but my goal this year is to take each competition as a performance and take it competition by competition. I don’t want to think about the things that come along with [competing], like pressure and what will happen if I skate well. I just want to focus on doing my best and improving on my last event, so I haven’t really thought that far in the game.

You’ve already improved so much between the Cup of China and NHK Trophy, which must have felt good, since you were an alternate at NHK.
Definitely. I didn’t even have a second Grand Prix this year because I hadn’t done well at Nationals, so I was just happy to get another Grand Prix. And then to medal at that Grand Prix…I think that it was really good for my confidence because I started the beginning of the year with only one [Grand Prix] competition and I hadn’t done as well as I wanted to [in China]. I’ve just been trying to improve and improve and improve at each step.

That’s a good attitude.
Thanks. Yeah, I’m trying to take this year as a positive, kind of a redemption year, and I’m trying to show people that I want this. I’m being more positive and looking at the bigger picture, I guess.

It’s a good way to look at things, especially at your age. I guess it seems like you’re “old” for the skating world, but a lot of the more recent ladies’ champions have been in their 20’s when they hit their peaks.
That’s true. I used to think I was old when I was 14 (laughs), but now I’m way older and think I’m still young.

You’ve come into your own as you’ve gotten older, too.
Yeah. Totally agree.

With your 20th birthday on April 16 and the Sochi Olympics just around the corner, it probably seems like a few chapters are closing in your life. What do you want to do when your competitive skating days are over?
Oh, umm…I honestly have no clue. People ask me this question all the time, and I’m just like, “I don’t really know!” I’m still not ready to close the chapter on skating and move onto other things, but I do have a lot of things that interest me, so I don’t know. But I feel like, when I’m ready, I’ll go to college. Education is really important to me, but right now, skating takes a lot of time and commitment. It’s kind of like an all-day thing. I did try to take classes two semesters ago, but doing it all just killed me. So right now, I’m just focusing on skating. I’ll go back to school after skating and find something I’m interested in then.

You have time!
Yeah, I don’t know. I have so much I want to do. I’m one of those Romantics who wants to travel the world when they’re young and live in a foreign country and just…I want to explore the world, I guess. And I hope that skating opens doors of opportunity for me, so I can find something I like through skating, as well. Like, some people go into commentating and others, like Vera Wang, go into design. There are endless possibilities.

It seems like you’ve had opportunities to interact with other cultures through skating, too.
Yes! Well, like, at the rink and stuff, too, there are all types of cultures. Sometimes, we go out and eat and stuff…like, one time, we went to Korean Barbecue and, just, ah…it was amazing!

Any other messages for your fans before we see you take the ice at the US Championships?
I’m going into Nationals with a really positive attitude this time. There’s not that much hype on me, which is good, because I can just, hopefully, do my best. And hopefully, that’ll be good enough!