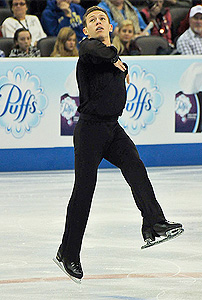 Grant Hochstein, who recently was named to replace the injured Evan Lysacek at the U.S. International Figure Skating Classic, September 11-14, in Salt Lake City, Utah, has launched a redesigned website at http://www.figureskatersonline.com/granthochstein.  Hochstein has had an official website, in cooperation with Figure Skaters Online, since 2009.

“I am very excited to be able to represent my country again internationally, and I would like to thank U.S. Figure Skating for giving me this opportunity,” Hochstein told Figure Skaters Online before he departed for Salt Lake City.  “I wish Evan Lysacek a speedy recovery and hope he can resume training again soon.”

He concluded by saying: “I am also grateful to Figure Skaters Online for redesigning my website and volunteering their time and expertise to help so many athletes like me.  What wonderful timing!”

Hochstein is a four-time U.S. senior men’s competitor at the National Championships, with his best finish to date being seventh in 2010. At the junior level, he won the pewter medal (2009), qualified for the 2009/2010 ISU Junior Grand Prix Final, and placed fifth at the 2010 ISU World Junior Championships. He is also a two-time U.S. Collegiate national champion (2010 and 2011).

Hochstein trains and coaches at the East West Ice Palace in Artesia, Calif. and represents the Skating Club of New York.  He is coached by Peter Oppegard and Karen Kwan-Oppegard, both of whom also choreograph his programs.