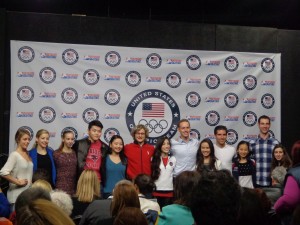 The Skating Club of Boston’s Marissa Castelli and Simon Shnapir won their second consecutive national title and will be heading to Russia in February. Joining them in Sochi are two-time silver medalists Felicia Zhang and Nathan Bartholomay. With only two spots, 2014 U.S. bronze medalists Caydee Denney and John Coughlin were left off the team, but have been named to the World team along with Castelli and Shnapir.

Men
Jeremy Abbott won his fourth national champion and secured a trip to Sochi. This will be Abbott’s second Olympics. 2014 U.S. silver medalist Jason Brown will join Abbott in Sochi. With only two spots, 2014 U.S. bronze medalist Max Aaron was left off the team, but has been named to the World team along with Abbott.

The most talked about U.S. Olympic team decision is with the ladies. The ladies had three coveted spots for Sochi. Eighteen-year-old Gracie Gold secured her spot, by winning her first U.S. Championship. The surprise of nationals came from 2013 U.S. Junior National Champion Polina Edmunds, who skated two solid programs to win the silver medal, her first medal at the senior level. The 15-year-old will join Gold in Sochi. For the third spot, U.S. Figure Skating chose to send Ashley Wagner, who finished in 4th in Boston, over the bronze medalist Mirai Nagasu.

For the Ice Dance Olympic team, head to ice-dance.com.

The Figure Skaters Online staff was in Boston. We spoke with a lot of our skaters and we will posting updates, new articles and photos to their sites in the coming days leading up to Sochi. Stay tuned!