Many deemed that the ladies event would be the battle of the Russians ladies, with 2016 World bronze medalist Anna Pogorilaya leading the way after the short program, followed by 2015 World bronze medalist Elena Radionova and 2014 World silver medalist Julia Lipnitskaya in second and third respectively.

Performing to “The Modigliani Suite” and “Memorial”, Pogorilaya completed a triple Lutz-triple toe combination, a triple lutz-single loop-triple Salchow combination as well as three more triples. She earned a 141.28 in the free skate, a season’s best for Pogorilaya, and earned a total score of 215.21  to win the gold medal.

“Overall, I feel that I did a good job,” Pogorilaya told the media.

Radionova, who skated before Pogorilaya, completed five clean triples, but fell on a triple loop. She earned 123.67 in the free skate and a total score of 195.60 to finish in second place.

“I can’t say that I’m satisfied with my program, there was that regretful fall and some other small errors. But this was my first Grand Prix. I hope I can prepare well for my next Grand Prix in China,” Radionova told the media after her performance.

Lipnitskaya, who was in third place after the short program, was unable to complete the Russian sweep. During her “Kill Bill” free skate, Lipnitskaia interrupted her program due to an injury. After speaking with the technical panel and her coach, Alexei Urmanov, Lipnitskaia decided to finish the program, but received a five-point deduction for the interruption and not completing three elements. She would finish the event in last place (148.13).

Team USA’s Courtney Hicks, who was in sixth place after the short program, ended up taking home the bronze medal. In the free skate to “The Hunchback of Notre Dame”, she completed six triple jumps, earning a new personal best free skate score of 119.30 and a total score of 182.98. This was Hick’s second Grand Prix medal of her career.

“I was very pleased with how I skated,” Hicks said to the media. “I thought I stayed with the program through the whole thing and I was really happy to go out and do two solid programs in this competition.”

World Champion Javier Fernandez, of Spain, continued his winning ways, by taking home gold in Russia. Fernandez, who was in second place after the short program, executed two quads, a quad Salchow-triple toe combination and six triple jumps during his “Elvis” free skate. He earned a free skate score of 201.43 and a total score of 292.98 to win the gold.

“My performance today was really, really good,” Fernandez said in the press conference following the event.

Japan’s Shoma Uno, who won gold at Skate America two weeks ago, had the lead after the short program. He opened his free skate with a quad flip, followed up with a quad toe loop and six more triples, but he fell on the second quad toe loop. He earned 186.48 points in the free skate and a total score of 285.07 to win the silver medal.

“Like my short, my free skating wasn’t quite perfect. I am not completely satisfied with today’s program,” Uno told the media.

With his gold from Skate America and the silver from Rostelecom Cup, Uno qualified for his second consecutive Grand Prix Final.

Israel’s Alexei Bychenko’s would move up from fourth place to take home the bronze medal. Bychenko earned a free skate score of 168.71 and had a total score of 255.52 points to win the first Grand Prix medal for an Israeli single skater in 20 years.

“My free program went well today, but there were a few errors and I missed some levels on the spins and footwork, so there is something left for me to work on. I am pleased with the result, though,” Bychenko said.

Russia’s Mikhail Kolyada  dropped from third to fourth after falling on a triple Lutz. Team USA’s Max Aaron pulled up from eighth after the short program to finish fifth.

Reigning World bronze medalists Aliona Savchenko and Bruno Massot, of Germany, took home gold in what was their first Grand Prix event as a team. Savchenko/Massot completed a huge triple twist, a triple toe, but Savchenko doubled the planned throw triple Axel and fell on the throw quad Salchow. Savchenko/Massot earned 138.38 points in the free skate and earned a total score of 207.89 to move up from second place after the short to claim the gold medal.

“Today was better than yesterday, we made a little progress. Not everything was a 100 percent yet, but we are improving step by step our result. We had prepared the throw quad Salchow at home and we decided to include it into the program here,” Savchenko explained to the media.

Natalia Zabiiako and Alexander Enbert, of Russia, finished behind Savchenko and Massot, earning the silver medal. Their free skate included a triple twist, triple toe-double toe-double loop combination, throw double Axel and throw triple loop, but Zabiiako missed the take-off for the side by side Salchow and Enbert fell on the jump. They earned a 128.01 in the free skate, and slipped to second place with a total score of 197.77.

“There was serious error on the Salchow. We did a double Salchow before in competition, now we went for the triple, we did it in practice. It didn’t work in competition today, but we know we can do it”, Enbert said to the media.

Fellow Russians Kristina Astakhov and Alexei Rogonov moved up one spot and earned the bronze medal. They completed a triple twist, throw triple flip and throw triple loop. but struggled with solo jumps loop and Salchow. They earned a free skate score of 123.23 and a total score of  188.74.

“To skate at home helped us. Too bad for the errors on the jumps, we can do them in training”, Rogonov commented to the media.

Italy’s Valentina Marchei and Ondrej Hotarek dropped from third to fourth and  Skate America champions Julianne Seguin and Charlie Bilodeau, of Canada came fifth. The Canadians will now have to wait and see if this and their gold from Skate America will be enough to make the Grand Prix Final. There were no Americans competing at the event.

Just a week after winning the silver at Skate Canada, 2016 World bronze medalist Madison Chock and Evan Bates competed in Russia, where they would end up taking home another silver. After winning the short dance, Chock and Bates slipped to second place after Bates stumbled on the twizzles that garnered only a level two. They would finish the free dance in third place, earning a 107.09 and an overall score of 182.13.

“Overall we have to take a lot of positives from this week and from the last two weeks having done our two Grand Prix in a row. Obviously I’m very disappointed to have made a such a big mistake in the twizzles in the free dance, which obviously cost us greatly in this competition,” Bates said during the post-competition press conference.

Russia’s Ekaterina Bobrova/Dmitri Soloviev, who won bronze at Skate America two weeks ago, danced to the gold medal with a personal best free skate of 111.76 points and a total score of 186.68.

Bobrova/Soloviev should qualify for the Grand Prix Finals as well as Chock and Bates.

Canada’s Kaitlyn Weaver and Andrew Poje took home the bronze medal with a free skate score of 108.76 and an overall score of 178.57. 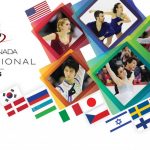