It was a repeat outcome for two-time World Champion Javier Fernandez, of Spain, who last week earned his first Grand Prix gold of the season at Rostelecom Cup.  Skating to a Elvis free skate, Fernandez executed three quads, but fell on his second triple Axel.  He scored 188.81 points and finished with a total score of 285.38 overall to win the gold.

“I feel a bit tired, it is the first time I did two competitions back to back, ” Fernandez told the media. “I was happy that I was able to perform not perfect, but really good.”

With two gold medals, Fernandez has qualified for the Grand Prix Final.

After withdrawing from Skate America due to injury, 2014 Olympic bronze medalist Denis Ten, of Kazakhstan, earned the silver medal in Paris. In his free skate to “Tosca” by Giacomo Puccini, Ten landed a quadruple toe loop and eight triples to pick up 180.05 points. He finished with a total of 269.26 to collect his first silver medal on the Grand Prix circuit.

“It was very important for me to start the season despite all the obstacles with a positive spirit and strong skate. I felt that I did a good progress not result-wise, but training-wise. This will lead me to further development,” the two-time World medalist commented to the media.

2016 U.S. Champion Adam Rippon was hoping to capitalize on his bronze medal performance at Skate America and bring home another Grand Prix medal in Paris. In his “The Arrival of the Birds” and “O” free skate, Rippon completed a quad toe loop and eight triples cleanly. He scored a personal best of 182.28 and finished the free skate in second place. With 267.53 points overall, which was also a personal best score, Rippon moved up from fourth place after the short program and picked up his second Grand Prix bronze medal this season.

“I feel like a huge weight is off my back landing the quad today. So nobody can say that I never landed it. I took it one element at a time. I just want to build on this at my competitions later this season, keep growing and just get better and better,” Rippon said, who also celebrated his 27th birthday on November 11.

Rippon will now have to wait and see if two third place finishes will be enough to qualify for the Grand Prix Final.

Making his senior Grand Prix debut, 2016 U.S. bronze medalist Nathan Chen scored a 92.85 in the short program, breaking Evan Lysacek’s record for highest short program score by an American. In second place heading into the free skate, Chen landed a quadruple Lutz-triple toeloop, a quadruple flip and quadruple toeloop (with his hand down), but missed two other quads and slipped from third to fourth place with an overall score of 264.80.

2016 World Champion Evgenia Medvedeva, of Russia, skated off with the gold medal in Paris, qualifying for her second Grand Prix Final. She landed six triples, but fell on a triple Lutz. She scored 143.02 points and finished with a total score of 221.54.

“I am very pleased to have qualified for the Grand Prix Final again, that is a step forward for me. However, with my performance today I am absolutely not satisfied. But mistakes push you further and make you work harder,” Medvedeva told the media.

Making her senior Grand Prix debut, Maria Sotskova, also of Russia, featured six clean triples in her “Adagio” by Alfred Schnittke free skate to win the silver medal. Her only mistake was a underrotated a triple Lutz. The reigning World Junior silver medalist posted a new personal best with 131.64 points and totaled 200.35 points.

“I am happy with my medal, but it was very difficult for me today. My performance wasn’t so good. I want to work harder to improve. At my next Grand Prix (NHK Trophy) I want to show my very best,” the 16-year-old told the media after her skate.

“This is my first senior Grand Prix and I was aiming for the podium. I am happy that I achieved that,” the Japanese skater told the press.

Like Fernandez, World bronze medalists Aliona Savchenko and Bruno Massot were also competing in back-to-back Grand Prix competitions. After winning gold in Russia, Savchenko and Massot repeated with another gold medal performance in France. Their free skate program to “Lighthouse” by Patrick Watson was highlighted by a high triple twist, difficult lifts and spins. However, Massot struggled with the side by side jumps while Savchenko missed the throw triple Axel, injuring her right ankle. They earned a free skate score of 133.04 and a total score of 201.59 points to win their second Grand Prix gold medal and qualify for the Grand Prix Final.

“I think we got a very good welcome here, it was amazing to skate here. It was really hard to do two competitions in a row, physically, but more so in the head and I did bad mistakes in the beginning of the program, but I came back in the program and we did good lifts,” Massot told the media after the free skate.

Russia’s Evgenia Tarasova and Vladimir Morozov claimed the silver medal. Their free skate was highlighted by a quadruple twist, throw triple loop and Salchow.  However, with mistakes on their side-by-side jumps, the European bronze medalists finished third in the free skating with 130.70 points, but remained in second place at 206.94 points.

“We got the silver medal, but it still wasn’t clean for us. We’re going the right way and today we did (landed) the quad twist for the first time in the Grand Prix. We skated better than as Skate America,” Morozov told the media.

With a bronze and a silver, Tarasova/Morozov have a good chance to grab a spot in the Final as well.

France’s Vanessa James and Morgan Cipres won the bronze medal in front of their home country. Their free skate to “The Sound of Silence” featured a triple twist, side by side triple toe-double toe and triple Salchow as well as a throw quad Salchow, albeit two-footed. The French Champions finished second in the free skate with 132.53 points and totaled 198.98 points to take the bronze.

“We are very happy with our performance today. It was hard for us to go back to skating after Skate America, which was a big disappointment. Today we fight on the ice,” Cipres noted.

For the ice-dance results, visit ice-dance.com. 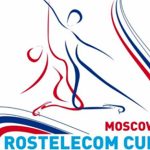