The Grand Prix series continued with the Cup of China in Beijing Nov. 18-20, 2016. Though the U.S. only took home one medal , that medal was gold, courtesy of reigning U.S. Champions Maia Shibutani and Alex Shibutani, who qualified for the Grand Prix Final with their second victory on the Grand Prix circuit this season. 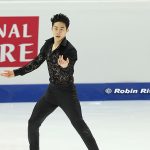