For the first time since Dick Button in 1952, men’s figure skating has a two-time, consecutive Olympic Champion.

Yuzuru Hanyu defended the title he won in Sochi in 2014 with a stirring, emotional performance to “Seimei,” a Japanese soundtrack. He landed three clean quads — salchow, toe loop, and quad toe-triple toe — and five other triples. Despite two technical bobbles, with a step out on another quad toe and a shaky landing on his final triple lutz, Hanyu was determined to hang on to every landing. His incomparable artistry and command over the area earned a standing ovation. He won his second consecutive Olympic gold with 317.85 points.

“This is the best day of my skating life. My tears were from my heart. I can find one word and that is happy,” an emotional Hanyu said following the free skate Saturday.

Hanyu had suffered an ankle injury in the fall and had not competed since October.

“I just thought, ‘skate’. Just think about skating all day, all week, every day. And I trusted,” he added.

Hanyu’s countryman Shoma Uno skated last in the final group and opened with a rough fall on a quad loop. Showing a similar grit and determination to Hanyu, Uno turned the program around and delivered an emotional, committed performance to Puccini’s “Turandot.” He landed his signature quad flip, plus a solo quad toe and a quad toe-double toe. Uno ended the program with two impressive triple-triple combinations: triple axel-half loop-triple flip and triple salchow-triple toe. He earned the silver medal with 306.9 points.

“Looking back at my performance, there is no disappointment. It was close to perfect,” Uno told the media. “I missed the first jump, but the rest of the program was fine. I stayed calm after the mistake and was able to give a good performance.”

Javier Fernandez won Spain’s first figure skating Olympic medal with his best performance of the season to “Man of La Macha.” Nearly all his jumps had interesting, difficult entries and he landed two quads and six triples. The only blemish in any otherwise flawless performance was a doubled quad salchow attempt in the second half of the program. He earned a season’s best of 197.66 in the long for a total of 305.24.

“It was a good experience. I even thought it wasn’t a perfect performance today it was a good one. Everybody was skating really well. I am so happy with the medal,” Fernandez shared. “It has been a lot of work and a lot of years, for the Olympic dream to win an Olympic medal. And I finally got it. Now I can sleep, I can rest and I can really enjoy it with my people around me.”

“I was very nervous at first, because in the six minutes warm-up I could not do any
element clean and I fell. My legs were shaky. But when I went out to compete, I was not so nervous anymore and I tried my best,” Jin said.

Perhaps the second-biggest story of the night after Hanyu was American Nathan Chen’s thrilling comeback. After a disappointing 17th-place short program, he vaulted all the way up to fifth place by winning the free skate with five clean quads. He is the first skater to ever land five clean quads at the Olympics. He almost had six, but had a slight touch down on the quad flip. He beat his previous personal best by more than 11 points on a night where he needed to be perfect, both for redemption and to move up in the standings.

“Definitely, there was a lot about redemption,” Chen said.  “Honestly, I just wanted to leave here satisfied with what I have done and I definitely am. I was really happy that I was able to at least do what I did. I made a mistake on the (quad) flip, so I have to think about that a little bit and I was able to put down the five quads and the triple Axel. I really had a good time on the ice. I’m happy I was able to do that, because it was risky and it was just hard. I really just wanted to do it, I was so low, that there was nothing I could really lose at that point and I just put it out there to see what would happen.”

It wasn’t Patrick Chan’s night in PyeongChang. The Canadian landed a beautiful opening quad toe-triple toe, but the doubled his second quad toe attempt and made a series of small errors from there: doubling an intended triple loop, putting a hand down on a triple axel, and even a trip in the footwork sequence. He ended the night in 9th place, in what is said to be his last competitive competition.

American Vincent Zhou was a surprise sixth place finisher, after he stood up on five quads of his own, though one was called underrotated and another had an edge call. Zhou skated with a passion and emotion that we haven’t seen from him yet, and his heart was on his sleeve when he pounded the ice and pumped his fists in joy at the end of the program. Zhou earned personal best scores in both segments of the competition for a new personal best overall total of 276.69 points.

Fellow American Adam Rippon may not have attempted a quad, but he won the hearts of the audience with his third clean performance of these Olympic Games. He delivered his program, about a bird with a broken wing, with calmness and precision. Rippon finished a respectable 10th in this stacked field with 259.36 points.

“My skate in the team event was for my teammates. This skate in the individual event, it was for me. I’ve had a really long career with a lot of ups and downs. To come away from these Olympic Games, to skate three clean programs in the midst of what seems like a lot going on, a top 10 finish in the individual event, and a bronze medal? It’s been a dream Olympic Games for me,” Rippon exclaimed. 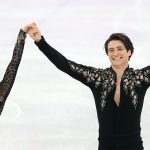 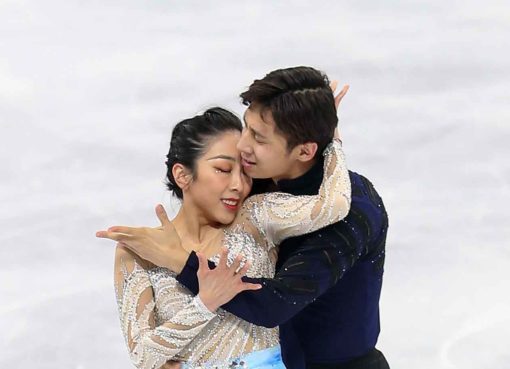