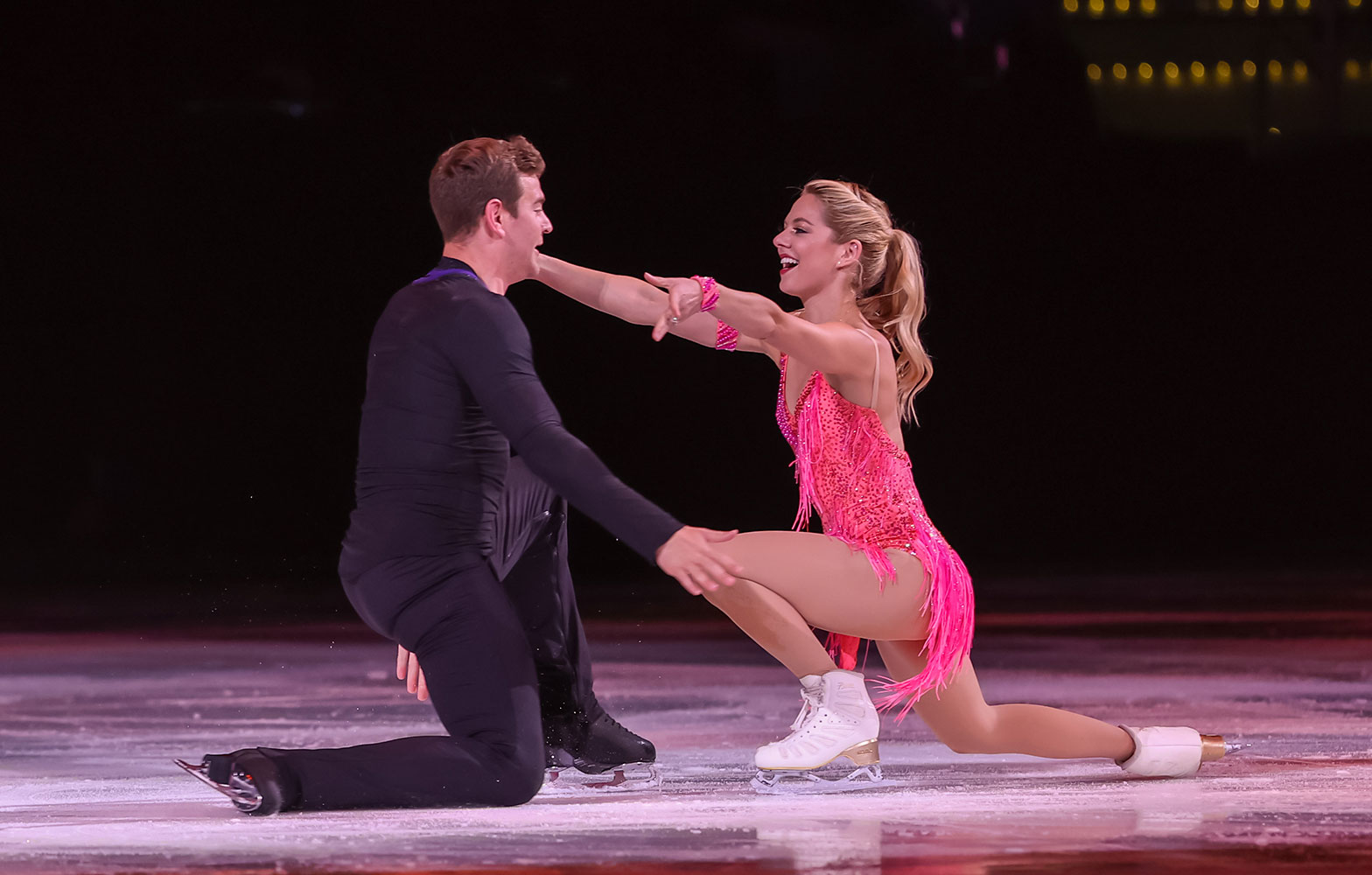 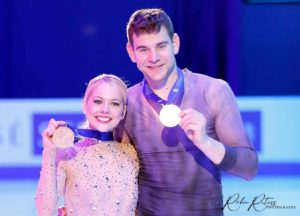 For Alexa Knierim and Brandon Frazier, this season has been golden. In February, the duo competed at the Beijing Winter Olympics, where they helped win a team medal for the United States (and placed sixth in their individual event). A month later, Knierim and Frazier won the 2022 ISU World Championships in France, becoming only the third U.S. pair ever to win a World title. Now, Knierim and Frazier are busy touring the U.S. as full cast members with Stars on Ice.

The team’s success is perhaps all the sweeter, as they have traveled a long road to get to this point. Frazier first started competitive pairs skating back in 2005, while Knierim began skating pairs in 2011. Knierim and Frazier were both national champions with their previous partners (Chris Knierim and Haven Denney), yet both experienced major setbacks as well, including serious illness and injury.

Since teaming up two years ago, Knierim, 30, and Frazier, 29, have been determined to simply enjoy the journey together. As Knierim said, their recent success is “the cherry on top.” Both are grateful for what they’ve been able to achieve this year, and for the opportunity to share their skating with audiences this spring in Stars on Ice.

Figure Skaters Online had the opportunity to chat with Knierim and Frazier before last weekend’s show in Boston. They talked about their experience with Stars on Ice, their approach to competition, and what advice they would give to younger pair teams.

FSO: Congratulations on winning your World title in March.

Knierim:  Thank you so much. Yes, we are truly honored. 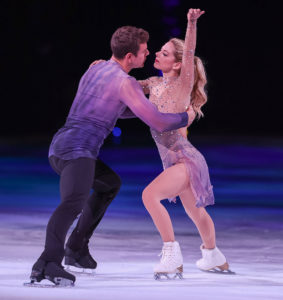 FSO:  Since then, you have been touring with Stars on Ice. You are the first U.S. pair to be invited to Stars on Ice in some time. What does it mean to you to be in the show? And are you enjoying the tour so far?

Frazier:  It means a lot to us to be included in this great tour. I know there hasn’t been a U.S. pair team on the full tour for a long time. So Alexa and I are really honored and privileged to be a part of it. It’s been way better than I could have ever hoped. It’s great being able to travel with our friends and training mates. And the show’s turning out to be an absolute blast. It seems like everyone is really enjoying watching the show.

Knierim:  I totally agree with what Brandon said. It’s really gratifying when we do the meet-and-greets. People mention how excited they are to see a pair team, and how different the lifts are, and the height on the throws. The feedback we’re getting is really positive, which is encouraging.

FSO:  Obviously, skating in shows is quite different than skating in competitions. Are there challenging aspects to it? Or is it just fun?

Frazier:  There’s definitely a lot more positive energy to it, and a different dynamic than competitive [skating]. There are some new things you learn when you start focusing on the tour and show skating. For me personally, I’m learning to really interact with the audience more. I always found that when you’re competing, you’re really zoned in. But now, just taking these opportunities to interact with the audience. It’s really fun to experience that style of skating, compared to the competitive side.

Knierim:  I feel like I’m a bit of a natural performer. It’s what I enjoy. But I’ve been able to take that to the next level with Brandon, because of how comfortable he’s becoming as a performer. You want to do your very best each time you go out. But there is a sense of freedom, knowing that there’s no big consequence if you make a mistake. We are trying some of our harder lifting elements. And we have one triple throw jump in each number. I always try my best to make it perfect and land it. But there’s just this sense of freedom, going for it each time. The audience isn’t looking for perfection; they’re looking for your joy. And that brings me a lot of fulfillment, and it’s a little bit different than competing.

FSO:  Alexa, I remember you saying once in an interview–quite some time ago–that lifts weren’t your favorite pair element, and that you didn’t always love doing them. But, you mentioned that you’re doing some in your show programs. So I’m just wondering if that has changed, and if you now enjoy doing lifts? 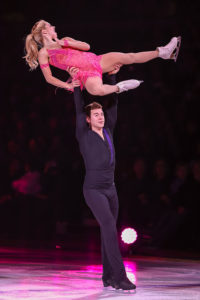 Knierim: I definitely enjoy lifts to a whole other level now. I think I was always very insecure of my abilities in lifts. Because, realistically, I had only really lifted with Chris [her former partner and husband]. And I wasn’t quite sure what I could do, because it was only one partner. But then, when I teamed up with Brandon, he encouraged me to try lifts he’d done that I never thought I’d be able to do. Seeing that I was capable gave me more confidence in myself. And, alongside that self-confidence, I really trusted the way Brandon took care of me when we were learning new lifts. I just felt safe and comfortable with Brandon. I always felt safe with Chris, as well. But, I think just doing them with someone else–and seeing that I can do these hard tricks, and it’s not just the partner underneath me– helped me a lot.

Brandon is one of the strongest lifters in the world. For him, it’s a no-brainer to try competition lifts in a show setting. And I think the crowd really loves it, because we’re able to do our no-hand lift that was our highest-scoring lift in our competitions. And it’s a crowd-pleaser. I’m really proud of the two of us for pushing ourselves in a Stars on Ice setting.

FSO:  You’ve had a lot of fun experiences outside the show, such as going to Disney World and seeing Elton John. What’s been your favorite moment so far from the off-ice activities?

Frazier: Hmm, that’s tricky. Each moment has been so great, because we’re spending it with everyone. We went to Disney World, and we got the complete VIP treatment, and we hit up all four major parks in one day. That was a trip and experience of a lifetime. And then we ended up at an Elton John concert. We all were in New York the last couple of days [before the Boston show]. They’re all so special in their different ways, so it’s tough to say which was my favorite. Seeing an Elton John concert was on my bucket list, so I got to check that off. For me personally, just being on these group activities with all my friends and teammates, that’s the biggest win of all for me.

FSO: Let’s turn back to the competitive side for a second. Both of you have been through a lot and sacrificed a lot for your skating careers. Did you feel like it was all worth it when you were on the podium at Worlds, or maybe at the Olympics competing? What did those moments mean to you? 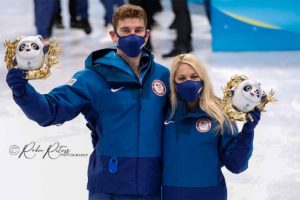 Knierim: [Laughs] You know, it’s so natural and easy to think that way, that we won, or we had a successful Olympic debut, and that it’s worth it. But Brandon and I have talked about it a lot, and even before the Olympics and the World championships, this whole journey was worth it, without the gold medal or results. Because Brandon and I did this for ourselves independently. We wanted to see what we were both capable of, because we had so much drive and grit to keep going for this sport. Being able to pursue that and take the risk was enough to make it feel worth it. Now, granted, winning a World title is absolutely incredible and like the cherry on top. It’s just phenomenal in every way. But I wholeheartedly would say, from the bottom of my heart, that it was worth it before the medals, the trophies, the excitement, and all that. I’m just really proud of us.

Frazier: When we achieved going to the Olympics, and put out some strong skating there … You have your moments, walking through the Opening Ceremonies, where you appreciate all the hard days you did. But I look at our chapter, and it means so much more than the titles and medals, for me personally. It’s completely changed my personal experience with this sport. It’s completely changed the way I look at it, and how I will always be able to, down the road, look back at it. I’ve been able to accomplish and do so many things that I’d always dreamed about doing in my short amount of time with Alexa. When we teamed up, we weren’t going after certain titles or specific placements. We just said, “We still want to compete, we still want to skate, because we love it. Let’s just see what we both can do to the full potential.” And that’s what we did, and that’s how we worked. 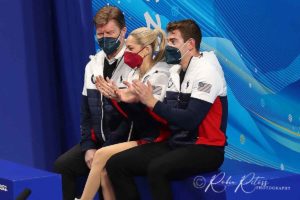 FSO:  Looking forward, it seems like we’re heading into a transitional period in U.S. pairs skating. Some top U.S. teams have split since the end of the season. And you haven’t announced your plans yet. Looking forward to the next few years, what would be your advice to some of the teams that will be coming up? What would you tell them?

Knierim:  Well, of course, listen to your heart and your gut, and pursue what you’re most drawn to. School is something that will be an option at many different ages of life, but figure skating is age-sensitive. So I would encourage them to follow their skating dreams and do academics on the side, or full-time, as well. But to really think twice about retiring to go full-time to college if you’re not quite ready yet. Because you can go back. I also believe that, in pairs skating and ice dance, longevity is key. Brandon and I teamed up after two very long partnerships previously, and we had a lot of success. For Brandon and I, as older skaters in this sport, it’s possible. And I just want to encourage everybody to keep trying, keep going after their dreams, and not look at a timeline or clock on when it’s the right time to walk away. You really need to listen to your soul.

Frazier:  I definitely agree with everything that Alexa said. You know, I remember when I was junior, when I was going into my first year of seniors … I spent an awful, exhaustive amount of energy worrying about other teams, and what the other teams in the U.S. were doing, or this person. And it’s very important to draw wisdom from those whom you’re competing against, and study [them] and do video. But I think when I teamed up with Alexa, the biggest thing I learned was to really just shut out everything. Focus on what you bring to the table, and put all your time and energy into making what you do well unique.

I think that’s what Alexa and I did. And I think that’s what made us so strong, in a short amount of time. We weren’t trying to match any of the teams that were around us. We weren’t trying to be like anyone else. We were trying to be Alexa and Brandon. And we brought a new dynamic to U.S. pairs by doing so. We were just speeding up to our own personal goal level and energy. That’s what I advise and hope that all the younger generation of U.S. pairs do. Don’t strive to be the person to the left or right. Just focus on what’s in front of you and what you do. And make it unique and special. 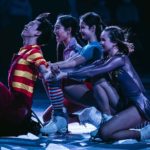 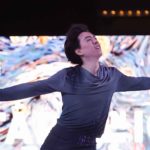 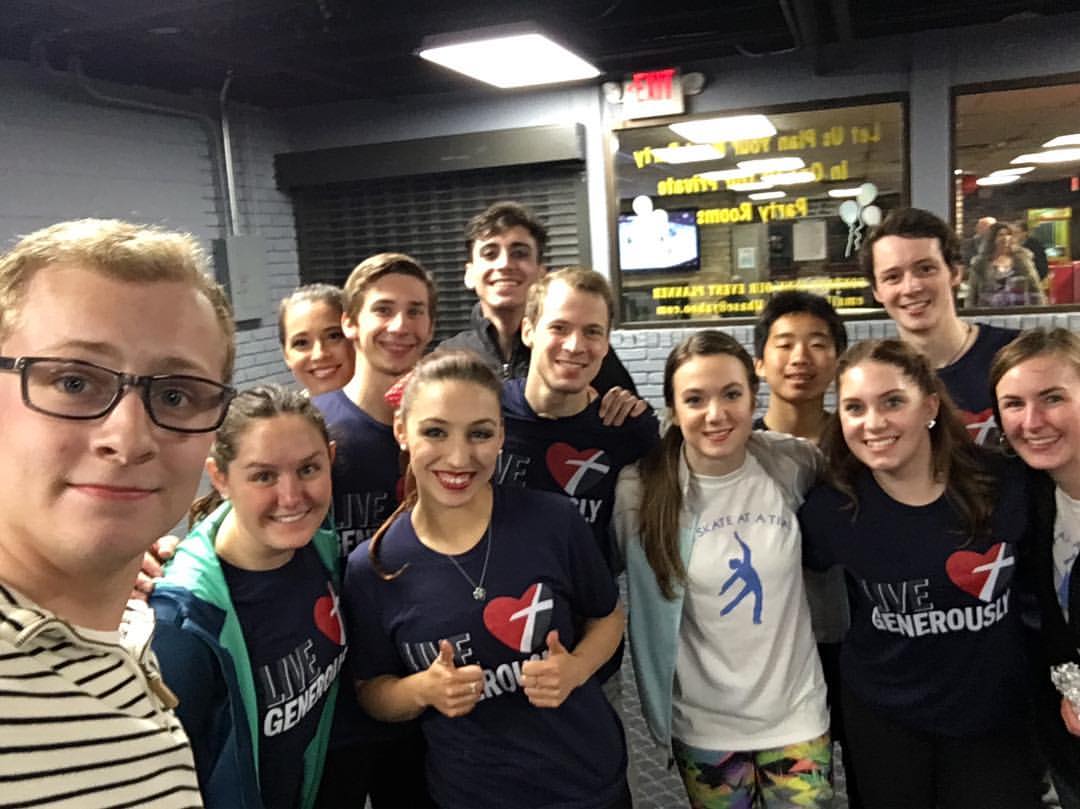 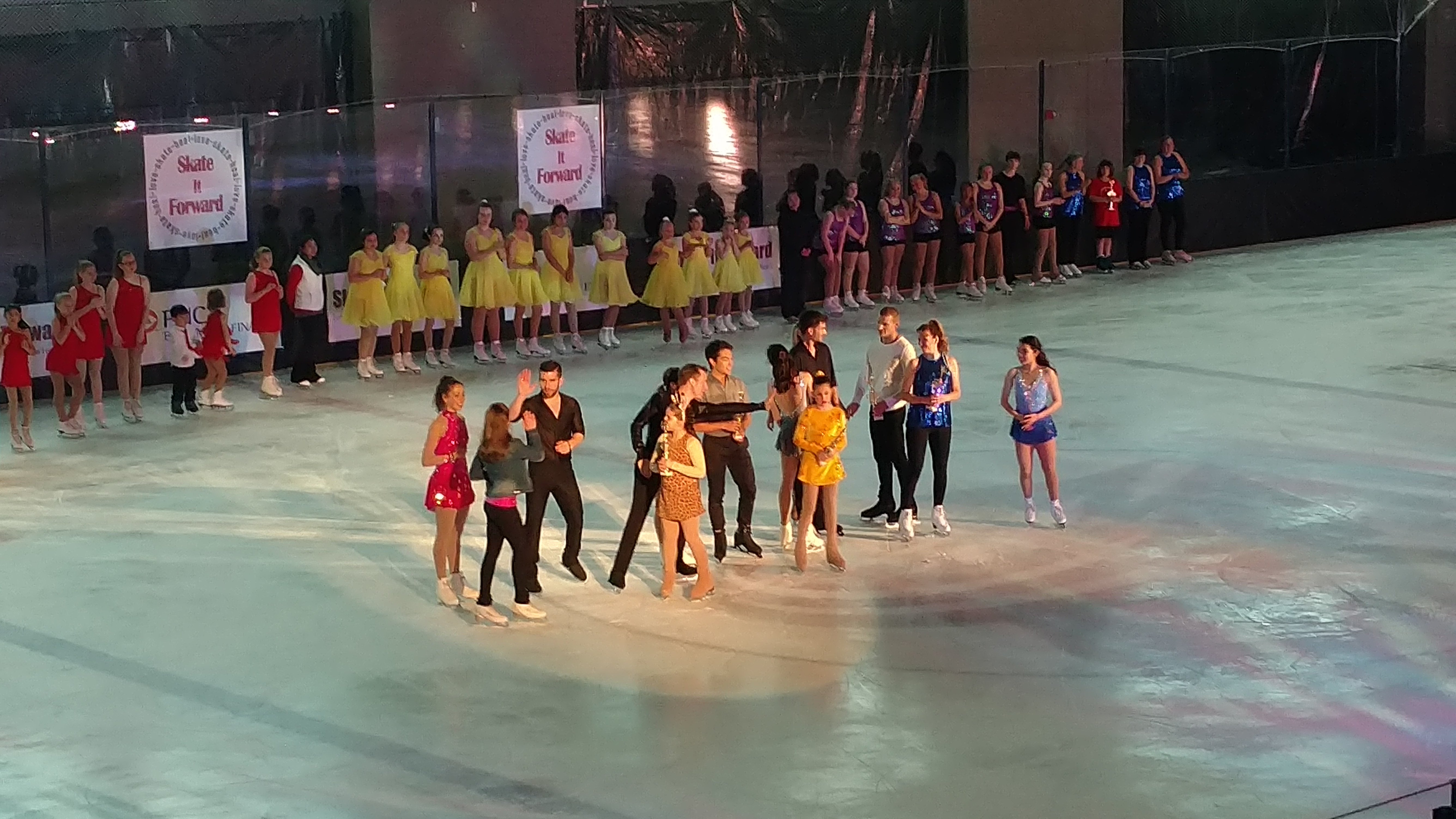