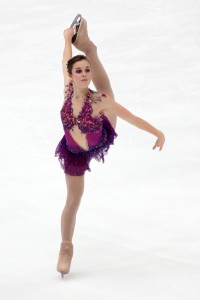 Ashley Wagner is ready to be No. 1.

A month removed from a fourth place finish at the Grand Prix Final in Tokyo, Japan, where she was the lone American woman competing, Wagner is aiming for her first national crown when she competes Thursday and Saturday at the 2010 U.S. Championships in Spokane, Wash.

But more important for Wagner than a U.S. Championship gold medal is earning a spot on the 2010 U.S. Olympic team. “My main goal for nationals is to make it onto the Olympic team,” said Wagner, who was fourth last year following a 12th place short program and first place free skate.

To start the season, Wagner finished second at the Rostelecom Cup in Moscow, Russia, and then followed that performance with a bronze medal at NHK Trophy in Nagano, Japan. She is the only American woman to medal at both of her 2009 Grand Prix events.

Before leaving for the U.S. Championships, where her younger brother Austin will also compete in the novice men’s competition, Wagner sat down with Figure Skaters Online to answer questions from her fans.

Jamie: Thank you for sitting down with us during such a busy time Ashley. Let’s just get right to the fan questions.
Ashley: I’m ready.

Rene: Thank you for taking the questions from your fans. I have really enjoyed your skating since I first saw you in Spokane for the 2007 U.S. Championships. Do you feel like you’re coming full-circle a little bit, returning to Spokane when you’re now one of the top seniors? Are you excited to be back in Spokane?
Ashley: It is a little bit like déjà vu to be honest, but I’m excited to be coming back to Spokane. I love the arena and the crowd out there is amazing so it is going to be fun to go back there for such an important Nationals!

Yuna: What is it like competing in front of an audience as big as the national championships? Is it hard to focus?
Ashley: I have been competing for so long that I barely even notice the audience anymore until after my program! It always helps to have a packed arena because it makes the event more exciting, but when it is time for me to do my job I don’t have a problem focusing.

Donald: Ashley, what are your goals for the national championships? Obviously, you want to win the gold medal and you want to move onto the Olympics. I am wondering thought if you and your coach [Priscilla Hill] have mini-goals in addition to the big two.
Ashley: My main goal for nationals is to make it onto the Olympic team. In order to accomplish that, Prill and I have set up a bunch of smaller goals. I am aiming to have no downgrades, to not get an edge call on my Lutz, and to improve my seasons best even further. If I am able to put all of those together, I think my main goal will be a lot easier to achieve.

Lois: Does being the lone American woman to make it to the Grand Prix give you an advantage at nationals? Do you think it could provide you with any disadvantages?
Ashley: Being the only US lady to go to the Grand Prix Final was a great experience for me to have. I don’t know if it really gives me much of an advantage, but it was nice to be able to see how both of my programs with score up against some of the top girls in the world. Also, any time that I can put out a program in front of a panel is a good experience for me to have.

Ivet: Hi Ashley. Earlier this year you went to Bulgaria for the World Junior Championships. Were you disappointed with the fact that you did not go to senior Worlds? Did that motivate you this season? And what are your impressions of Bulgaria? Did you like the people and the food?
Ashley: Any chance to compete on the international scene is a good experience to have, so I didn’t mind going to Junior Worlds. I had a great time while I was there, and I really enjoyed the people and the food.

Dominique: Ashley, what is the biggest lesson that you’ve learned from your training with Priscilla Hill over the past season or so? How many hours do you train a week?
Ashley: I am so lucky that I get to train with such an amazing and talented coach. Prill has worked really hard with me to get me to where I am now. Skating with Priscilla has really just allowed me to have fun with my skating again and enjoy it. I am so much more relaxed, and I really owe it all to her! As for the training, she didn’t get me to the point that I’m at now without some crazy training! I am on the ice for about 3 or 4 hours a day and then I do off-ice conditioning for 2 hours a day.

Yuna: Did you ever expect you would get this far in the sport of figure skating? If you made the U.S. Olympic team would you be accomplishing your dream?
Ashley: My parents always told me when I was younger that if I really believed in what I was doing I’d be able to accomplish great things. For the past 13 years that I have been skating I have really just worked hard and stayed focus on my main goal.  I think it’s crazy that I am SO close to accomplishing my dreams.

Roseanne: What are your first memories of the Olympics?
Ashley: My first real memory of the Olympics would be watching Tara Lipinski skate her long program in Nagano. I was about 7 at the time and I saw how excited she looked when she realized that she had won. I became addicted after that, and I’ve had my “Olympic dreams” after that.

Reese: Are you looking to more academic work after the Olympic season is over? Will you be transferring anywhere?
Ashley: I want to get started on some seriously classes next year. I took two classes from a local community college in DC for this past semester, but I hope to enroll at University of Delaware next year so I can start working towards a degree.

John: Do you plan to continue skating after this season?
Ashley: Yes, I do. Working with Prill this season and seeing how far my skating has come in the past year has really encouraged me to keep skating for another season. I’m finally enjoying what I’m doing and I don’t think I’m ready to stop just yet.

Yuna: Who was your favorite skater growing up?
Ashley: Tara Lipinski was my idol as I was growing up. I really looked up to her determination and composure at the ’98 Olympics.

Jassen: What do you find to be the biggest challenge with being an elite athlete? And how do you deal with that challenge?
Ashley: Being an elite athlete takes a lot of hard work and money. I am paying for everything by myself, so at times its hard to make ends meet, but I’ve been lucky to have the support of Skating Club of Wilmington as well as many others who have donated money to my skating. As for the training, I am determined to make it to the Olympics, so I am going to do anything I possibly can to make it there.

Nathalie: Hi Ashley! You spend such long days at the rink. What do you do to relax and take your mind off of skating when at home or at the rink when practice is over?
Ashley: I am a huge book worm, I always have a book with me if I ever get that extra time. I also like to go on runs because they help me wind down and relax. It has been way too cold outside lately though so I haven’t been for a little while!

Katrina: Ashley, when you’re not on the road, what’s your guilty pleasure TV show? Not the shows you regularly watch, but a show that you don’t admit publically that you love to watch?
Ashley: Hmm, that is a good question.  I don’t really have a guilty pleasure because I own up to everything I watch! I watch a lot of House, Family Guy and the Office, but I don’t consider any of those guilty pleasures.

Dani: Ashley, I have really enjoyed  being your friend on Facebook, reading your tweets and especially watching your videos on YouTube. Why did you decide to be so open with fans? Some skaters don’t appreciate us at all.
Ashley: I think that reaching out to fans is really important.  Anyone out there who acknowledges me as an athlete deserves to have some sort of a connection with me, so I really try to make everyone feel like they are included in some way. I tweet regularly so that people know what is going on in my life, and I really appreciate all of the support I get from my fans!!

Nathalie: You’ve travelled all over the world for your competitions. Which country/city did you like best? Have you even been to Belgium? Thank you Ashley. I hope you have a great nationals.
Ashley: Thank you! I have never been to Belgium unfortunately, but I hope to go there someday. I loveAustria and basically anywhere else in Europe. I hope to someday go on my own “Eurotrip” just to go see everything and experience the amazing cultures.

Jamie: Thank you for taking the time to answer questions from your fans Ashley. Is there anything that you would like to add before we let you go?
Ashley: Thank you so much for the support everyone. I hope to give you guys some good news in the next few days.