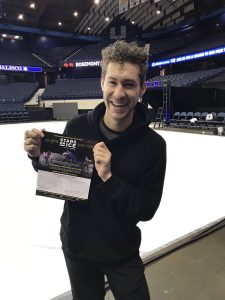 2015 U.S. Champion and 2014 Olympic team bronze medalist Jason Brown took some time out of his pre-show warmup at the Chicago stop of the Stars on Ice tour—his hometown show—to catch up with Figure Skaters Online. He only appeared in one weekend of shows on the tour to maximize his off-season training. Read on for more about his first year training with his new coaching team of Tracy Wilson and Brian Orser, and his friendships with other skaters at the Toronto Cricket and Curling Club.

Figure Skaters Online (FSO):You’re only doing a few shows on the tour this year—what does it mean to you to skate in your hometown show in Chicago?

Jason Brown: I’m so happy, I love Stars on Ice. I’m so glad to be a part of it. I’m only here this weekend doing it, so I’m so glad, obviously, coming home, doing Chicago’s show, I could not be more thrilled. I have tons of family coming, lots of friends. It’s just always nice to be around all of the skaters that I grew up with, from all of the rinks that I grew up in. I get tonight [to visit], and then fly back to Toronto tomorrow morning.

FSO: What are you skating to in the show this year?

Jason: I’m skating to my short program from the season, “Love is a B*itch.” I’m skating to kind of a variation. I tried to do the whole thing at St. Paul’s show, but converting something that you’ve done and worked so hard to push out didn’t quite translate. It’s a much smaller ice surface. The shape is much different, especially when you’ve trained a program all season [on full ice], so I made a couple adjustments. And I’m skating to [Broadway musical] Dear Evan Hansen, “Waving Through a Window.”

FSO: What made you decide to only participate in a few shows this year?

Brown: Right now, I’m going through a lot of technical changes with my new coaches, and we’ve been making a lot of changes as a whole. From equipment changes, we’re trying to test the waters, try different things, to see what sticks, see what doesn’t. I have new boots, but I don’t know if I’m keeping them. I’m in the limbo mode right now. With the shows being every weekend, it’s hard to make technical changes and then come back to the shows, and go half and half in both. So we decided to just stick with it, this year, to continue focusing on all the changes and limit the shows so that we could make the most of the off-season. It’s hard because I really would love to do the full tour. But you know what? There will be a tour in the future that I will do.

FSO: You had a year of transition and, to the media and fans, it seemed like you were patient and trusted both the process and your coaches. Now that you are a little removed from this season of transition, how do you look back on it?

Brown: I definitely went in with a very open attitude, a very open mind with all the changes. I kind of was thrown into an ocean and we’re like, ‘we’ll see what happens! Will I find the shore? Will I kind of just tread water for a while and figure my way through?’ I’m very fortunate that Tracy [Wilson] and Brian [Orser] were very patient with me and were very willing to work with me and adjust. And I was the same way, very open for any sort of advice, any sort of technical changes that they wanted to instill. I did struggle a bit in the beginning of the season in trying to find my footing. We kind of made it through, about halfway through the season, and we were like, ‘OK, let’s just stop a little bit about all the changes we were making and get settled with what we’ve done so far.’ It really helped me through the second part of the season to just get comfortable and confident—to get my confidence back, really. That’s why I’m using this time, unfortunately instead of being on tour, to really solidify, to continue to solidify more changes.

FSO: How is summer training going? Have you chosen new programs yet?

Jason: It’s been good. Just constantly making changes. I haven’t taken any time off since Worlds, so I am taking some time off the next two weeks. I’ll get back to Toronto for a week, but then I’m going to take two weeks off. Excited about that. I’m going to Slovenia for a week and Italy for a week. But we really wanted to continue on all the changes while I was still in shape and not after break and coming back slow. We really wanted to keep working through it. I’ve been trying my best to just utilize the time as best that I can, and it’s been great. I have not started [next year’s programs].

FSO: The Cricket Club seems like a supportive training environment overall, with everyone also pushing each other. Tell us what that’s been like for you.

Brown: It’s great. I think something that I’ve said in the past, but that I think is so incredible about the Toronto environment is that you have all these different skaters from all these different countries, which is so neat. So you’re really pushing each other, but you’re not fighting for each other’s spots. So I really, really enjoy that competitive atmosphere, while nothing that one person will do will take away from you, or stop you from competing at an event. It’s a really good, friendly, competitive environment. We’re all close and friends and cheering each other on. It’s fun to go to events with each other.

FSO: Tell me about your friendship with fellow Toronto newcomer Evgenia Medvedeva.

Jason: I moved to Toronto about two weeks before she got there. I went through it, and went through the change. I knew that her and her mom were coming, and I reached out to her one day like, if you need anything, I’m more than happy to pick you up at the airport, and she said, ‘That would be amazing.’ It was really fun. I picked her up from the airport; I got them settled in their apartment. I got their phone plans all situated. It was really good. I always joke with her that I was just really hoping that we got along. How sad, that would have been a rough start if we were not connecting. [She is] the nicest person, I really love Evgenia and we really feed off each other in the rink and outside of the rink.

For more on Jason Brown, visit his official website at http://jasonbrown.figureskatersonline.com/