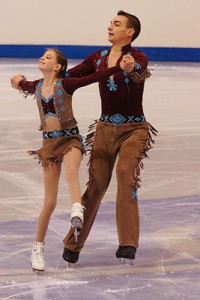 Carman and Knierim, members of the Broadmoor Skating Club, have already formed partnerships with other skaters. Both new teams will train under the direction of Dalilah Sappenfield at the World Arena and Ice Hall in Colorado Springs, Colo.

“I am very grateful for the past three years we had together,” she said. “I feel we have both accomplished so much and wouldn’t be the skaters we are today if it weren’t for our successful three year partnership.”

In their time together, they won three consecutive medals at the U.S. Championships, with the first being a pewter medal in the 2007 novice event. They competed as juniors internationally this season, placing ninth at Junior Grand Prix Mexico, fifth at JGP Mexico and ninth at the World Junior Championships.

“I want to thank all our fans, friends, coaches and families for all their support over the years,” Carman said. “I also want to give a huge thank you to U.S. Figure Skating for believing in us. The internationals we participated in this year were very special and rewarding. We will take those experiences with us throughout our skating careers.”