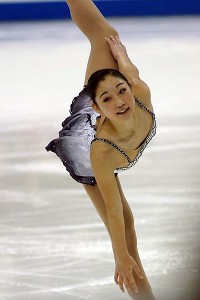 After a dismal showing last season because of an ankle injury that eventually forced her to withdraw from February’s World Junior Championships, 2008 U.S. Champion Mirai Nagasu served notice Friday that she is back. She won the short program at Cup of China in Beijing, China, her first international of the season with 62.20 points.

“Coming out of a disappointing season it’s a surprise for me to be in first place at the Grand Prix,” said Nagasu, who started training with renowned coach Frank Carroll in May. “It is a little overwhelming. Hopefully I forget about it and just go into the long program strong.”

For the technical elements, she ranked fourth in the competition with 33.40.

Nagasu, who skated last in the first warm up group, Pirates of the Caribbean, nailed a triple Lutz-double toe, although the first jump received an edge warning, a triple flip and a double axel out of an Ina Bauer, putting her first in the element score with 37.40. She also performed three Level 4 spins, a Level 4 spiral sequence and a Level 3 circular step sequence.

Reigning World silver medalist Joannie Rochette, who was favored to win Cup of China, is in seventh place with 52.12 points. Her performance included only three jumps, including a triple flip. She doubled her opening triple lutz and left off the second jump in the combination. She also singled the axel.

Ninth place belongs to American Beatrisa Liang (50.76), who had negative grades of execution on four elements including the triple lutz-double toe, which also yielded an edge call on the first jump, and the double axel. Liang had two Level 4 spins and a Level 4 spiral sequence.

Americans Madison Chock and Greg Zuerlein made a respectable debut performance in their first career Grand Prix. After the compulsory dance, the reigning World Junior Champions are in seventh place with 28.76.