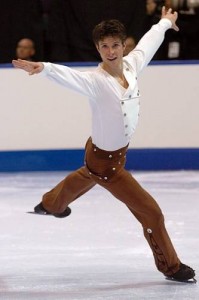 On December 18, two-time national medalist Ryan Jahnke added another accolade to his resume. The former member of the U.S. World Championship team graduated from the University of Colorado, where he majored in finance and a minored in information systems.

Now Jahnke is focused on putting his college degree to good use, launching his new Web site MySkatingMall.com, which gives skaters an outlet for buying and selling gently used skating related items, with a portion of sales going to skating clubs. The site is expected to be online in March.

Jahnke, who spent thousands of dollars on items throughout his career, last competed in the 2005-06 season, placing sixth at his sole Grand Prix event that year, Cup of China, and again placing sixth at the U.S. Championships.

He is the 2003 national bronze medalist— going on to place 13th at the World Championships — and the 2004 pewter medalist. Jahnke also won the silver medal at 2004 Skate America and followed that with a fourth place showing at Skate Canada.

“Since hanging up my competitive skates, I’ve been coaching full time at the World Arena in Colorado Springs and I returned to college to complete my undergraduate degree,” Jahnke said. “I am still happily married to Tashiana [since June 1, 2002] and we hope to start our family in the next couple years.”

Figure Skaters Online sat down with Janhke to talk about his new online venture.

Where did the ideal for MySkatingMall.com come about?

The idea was sparked by a comment from my father.  We must have been discussing something dealing with the plethora of skating outfits in my closet from past seasons. He said something like, “There should be a website to sell all these things.” That was the seed  planted in my head. It grew when I observed many skating families struggling to keep up with the expense of our sport due to economic challenges. Through my volunteer work with U.S. Figure Skating, I noticed clubs were also hurting financially. I was able to meld these and other observations together into what I hope is a very timely idea.

At first I was thinking of calling it Myskatingcloset.com. It was actually Paul Wylie who suggested I pick a “bigger” name like Myskatingmall.com.  I developed a business plan and presented it to U.S. Figure Skating. My original idea was to give the idea to them so that Myskatingmall.com could  become another revenue stream for USFS, similar to IceNetwork. From being a past athlete representative to USFS’s Board of Directors, I knew it was part of the organization’s strategic plan to diversify revenue streams by 2010. I wanted to help USFS raise money for athlete programs. I benefited from many of them during my 21 years competing.  USFS was very supportive of the idea but decided not to fund the project due to budget constraints. At that point, I decided to proceed on my own.

Is this site years in the making?

I started developing Myskatingmall.com in September 2008. But I think there has been a need for skaters to buy and sell gently used outfits for years. It is amazing how much money we spend on outfits to only wear them about 10 times.

When you were competitively skating, how much did costumes cost you?

While I was competing, I was spending between $800-$1,000 per year on competition outfits, about $200 on practice outfits, skates and blades were over $1,200.   It would not have been appropriate for me to buy all of those things used. But at least through Myskatingmall.com, those purchases will raise money for a skating club or team to support its skaters.

When the site fully launches in March 2010, what can we expect from it? Are there going to be any “goodies” besides being able to buy and sell gently used items?

On Myskatingmall.com, people will be able to buy new and gently used skating items. Even custom made skating outfits will be available for order.  Just like a good brick-and-mortar mall, Myskatingmall will eventually have everything that a skating shopper would want.  One of our goals is that Myskatingmall will have the best search capability of any skating website.  Skaters will be able to search by multiple different categories like outfit theme, size, color, etc. in order to find what they are looking for.  If there is nothing available that matches the search criteria, shoppers will be able to set up a custom search that will alert them when the item becomes available.

I love the fundraising feature of Myskatingmall.com. Clubs, synchronized teams, and Theater on Ice teams are all eligible to benefit from the 5-percent on every purchase that is given to grassroots skating.

What are some of the items that might be for sale?

As long as an item is skating related, it can be sold on Myskatingmall.com.  The beauty of the site is that Myskatingmall.com is just a place to connect buyers and sellers; we are not selling items ourselves.  It is completely “free market” but obviously items need to be appropriate for all ages. Myskatingmall is not competing with existing skating businesses but partnering with them to support grassroots skating.  Skaters can sell any gently used or new item as well.  You’ll be able to find dresses, boots, blades, practice outfits, edited music to skate to, books, gifts, bags, and it goes on and on.

You’re obviously the driving force behind MySkatingMall.com but who are the other people on your team?

There is definitely a team of people working on Myskatingmall.com. I”ve hired a web design company to do the actual building of the site, a group of students from the University of Colorado at Colorado Springs are assisting in research and promotions, and our “beta team” has over 30 members.  The beta team is a group of people who have volunteered to give their opinions and expertise to help the development of Myskatingmall. There are people from the U.S., Canada, Australia, big training centers, small towns, individuals from every discipline of skating, coaches, judges and officials.  I really want Myskatingmall to fulfill the needs of the entire skating community. It really is a community effort.

Thank you for taking the time to talk with us Ryan. Two last questions, what are some of your thoughts on the skating world right now? Do you have any picks for to make the U.S. Olympic Team for Vancouver?

I’m not a big fan of making predictions on who will be going to Vancouver. I want every competitor to give what they have without feeling like they are being judged ahead of time. That used to bug me. Can you tell? I am engrossed in the skating world day in and day out as I train competitive skaters in Colorado Springs.

I can’t quite decide if I like where things are going or not.  Sometimes I like watching YouTube videos of classic skaters like Janet Lynn and John Curry. Skating has changed so much. I miss the simplicity of their skating and the amazing glide of their blades.

On the other hand, the IJS system makes it much easier for skaters to track their progress. I think programs take more athleticism  now because there is no time to rest! I do hope that the IJS system will eventually allow more variety in non-jumping elements so that skating won’t feel so constrained.