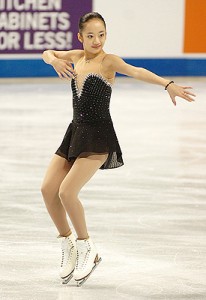 Lauren Dinh burst onto the U.S. figure skating scene last season, winning the silver medal at the 2011 U.S. Championships in the junior ladies event. But many skating fans are not  familiar with this humble 15-year-old high school sophomore as she relies on her quiet determination.

Success hasn’t always come easy for Dinh, who is coached by Damon Allen in Colorado Springs, Colo.  In 2009, she failed to qualify for sectionals as a novice, leaving her out of the 2010 U.S. Championships in Spokane, Wash.

Looking back on the experience, Dinh said the 2009-10 season was hard for her.  After the Southwestern Regional Championships, where she was seventh, she began to approach her training differently.

“I took things one step at a time and didn’t get ahead of myself,” she said. With that approach, Dinh began to skate more clean programs, which gave her more confidence heading into the 2010-11 season, her best yet.

Dinh won the junior event at Southwestern Regional Championship, the Midwestern Sectional Championship. After gracing the podium at nationals, she received her first international assignment, the Gardena Trophy in Italy, which she won.  She described the competition as a great learning experience.

“Winning was great,” she said.

With a Lutz, her favorite jump, being the the solo jump required for the junior ladies short program this year, she has confidence that she can start the competition strongly. She’s also upping her technical content in her free skate, planning to add a double Axel-triple toe combination for Poland and working on a triple flip-triple toe combination for later in the fall.

Dinh has two new programs this season, including a tango themed short program to “Fumando Espero” by Carlos Garcia.  “I heard the music  and knew I wanted to skate to it,” she said. Her free skate was choreographed by Allen to “Scheherazade”, music she felt it was perfect to display the improvements she’s been making in the off season including strengthened transitions.

With a longer 2010-11 season than expected because of her spring international and time spent preparing for her senior tests, Dinh felt less than 100-percent prepared for her outing at the Liberty Open earlier this summer. She had difficulties with the jumps in her free skate but said she is prepared to make a strong JGP debut.

As she’s looking ahead to this season and making the jump to seniors nationally, she said she looks up to two-time U.S. Champion Alissa Czisny, 2010 U.S. Champion Rachael Flatt and 2008 U.S. Champion Mirai Nagasu and is watching these ladies to see how they present themselves on the ice.

“Competing against them will further motivate me this season,” she said.

Her goals for this season include working on her skating skills and transitions as well as having more maturity and presence on the ice.  “I want to have fun and skate my best at every competition,” she added.

Dinh is a star student at Cheyenne Mountain High School, where several famous skaters have also walked the halls including Flatt and 2009 U.S. Junior Ladies Champion Alexe Gilles.  She finds the environment very supportive, having other skaters in your classes who understand what you’re going through on a day to day basis.

Dinh says she handles her schedule by focusing on one thing at a time, just like her idol Flatt, the 2010 Olympian who starts at Stanford University this fall.  When she is at school, she doesn’t think about skating and vice versa.  She’s up every morning at 6 a.m. and attends school from 7:30 a.m. to noon.  She fits her homework in between skating sessions in the afternoon.

After skating, plans to one day be an orthopedic surgeon. Dinh also wants to give back by starting a charity foundation to provide access to quality education for disadvantaged children. But for now, the focus is on making it through high school and on to the 2014 U.S. Olympic Team.

“I’ll take it one step at a time and hopefully it will bring me far,” she said.

She finds the best part about being a figure skater is getting to express how you feel through movement.  “It’s a really great feeling and something I look forward to doing every day,” said Dinh, who describes herself as hardworking.

“If I really want something, I try hard to get it,” she said.

As a skater she wants to be known as someone who “has the overall package,” she said.

“That has consistent jumps but also has the skating skills and the in betweens.”

With her determination and positive attitude,  it will not be long before her name is a fixture in the skating world. 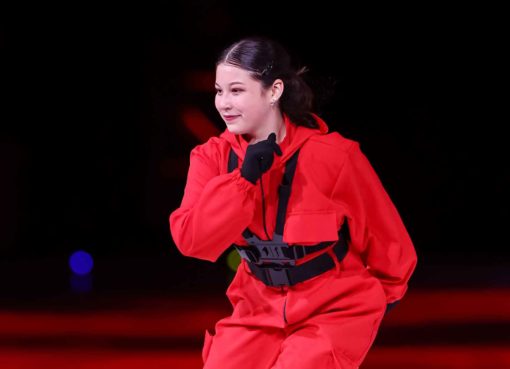