Editor’s Note: Figure Skaters Online is excited to welcome 2020 U.S. silver medalists Jessica Calalang and Brian Johnson with the launch of their official website. You can check it out at calalang-johnson.figureskatersonline.com. 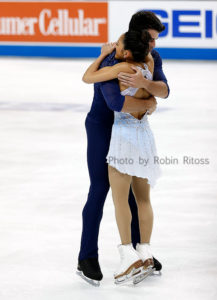 “Our season was something that we will hold on to so dearly,” Calalang said. “Each competition, we slowly improved, whether it was in skating skills or the choreography or the elements. It was just a really special season in that, at each competition, we got better.”

Last season was Calalang and Johnson’s second year competing as a pair. The duo participated in two Grand Prix competitions (Skate America and Skate Canada), won an ISU Challenger Series event (Warsaw Cup), and then placed first in the free skate at 2020 U.S. Nationals, earning them the silver medal.

“It was a whirlwind,” Calalang said of their experience at Nationals. “We had been skating very consistently in practice. So it wasn’t a surprise that we had that clean long program at Nationals. But it was like, ‘Oh, my goodness, we just did it on the national stage!’ We did it when it mattered the most.”

Calalang and Johnson’s sparkling free skate at Nationals was one of the highlights of the entire competition. Afterward, the duo were pleasantly surprised by the attention they received from fans.

“It was so cool,” said Calalang. “We’d been to a number of Nationals, and usually just a few people here and there would recognize us and want to talk to us. But this year, we had a line [of people]. We were like, ‘Oh my gosh, they want to talk to us!’”

Both Calalang and Johnson consider 2020 U.S. Nationals to be a career highlight.

“So far,” Johnson said with a chuckle.

“Yes. So far. We hope to have more of those moments,” Calalang agreed, looking to the future.

Calalang and Johnson followed up their U.S. Nationals experience with another strong performance at the 2020 ISU Four Continents championships in February, where they placed third in the free skate and a solid fourth overall.

“It was a little bittersweet,” Calalang said of the unforeseen turn of events. “Of course, we wanted to go to Worlds and continue this dream season that we had in our second year. But Alexa and Chris were our training mates. And we saw them every day. So we didn’t want them to withdraw, obviously.”

“We wanted to cheer them on and root for them and wish them the best,” Johnson agreed. “It was a little hard to see them retire before the last [event] of the season.”

“It was a mix of emotions,” Calalang added.

Despite training with the Knierims, Calalang and Johnson were surprised by their decision.

“None of us had any idea,” Johnson said.

Calalang and Johnson busied themselves with preparations for Worlds. However, the spread of the coronavirus in North America soon began to overshadow plans for the upcoming competition. Like many who were intending to go to Worlds, Calalang and Johnson kept scanning Twitter for news about the event.

They were on a training break at their rink on Wednesday, March 11, when the Quebec government and health ministry officially announced the cancellation of Worlds.

“Everyone was shocked,” Calalang said of the reaction at their rink. “But understanding that it was for the best, due to the circumstances that were going on in the world, and are still going on.”

Johnson said the cancellation of Worlds was the low point of their season. “It was like: ‘This really sucks, but there’s nothing we can do about it.’ It had to be done,” Johnson said regretfully.

“There was a small silver lining. “As soon as they announced that they were not going to have the event, Brian and I looked at each other. And we were like, ‘All right, can we go get pizza now?’” Calalang laughed.

Since then, it’s been an unusual off-season for Calalang and Johnson. Their training facility–Great Park Ice in Irvine, CA–closed in mid-March, a few days after the Worlds announcement. Most other local rinks closed as well, leaving the skaters with no ice on which to practice.

Calalang and Johnson were off the ice for about three months total.  “I don’t think I’d had this long of a break in 10 years,” Johnson commented.

“The break did come at a good time for us,” Calalang said. “Because we had been going, going, going for so long. Competition after competition, and then we had [training] for Worlds. We were a little tired, leading up to Worlds.”

“It was nice to let your body recover,” Johnson agreed.

The team took a few weeks off entirely from training, keeping in touch as needed. “Brian and I are very professional,” Calalang said of their relationship. “We do what we need to do at the rink and at our workouts. And then we go on with our lives. And when we come back together, we have that common goal. That’s what makes our partnership work.”

Johnson agreed. “When we have stuff to talk about, we talk about it. But otherwise, we’re doing our own thing, off ice.” 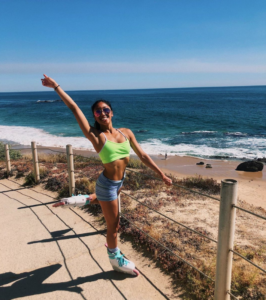 During the break, Johnson kept busy pursuing his interest in working on cars. Calalang, meanwhile, tried a new hobby: Rollerblading.

“It’s similar to figure skating, but different,” Calalang said. Although nervous to try it at first, she found that she enjoyed rollerblading. “I really just push on one foot and glide on two feet until I’m ready to push again. Nothing fancy over here.”

Along with a friend who also coaches at their rink, Calalang explored different rollerblading venues around southern California.

“We would try different boardwalks, in different cities,” Calalang said. “We’d go eight or ten miles in one round. It kept me busy. It kept me tan,” she said, with a laugh.

After a few weeks, Calalang and Johnson resumed off-ice workouts, both together and individually. It was not until mid-May that their training group finally returned to the ice at a small rink in the L.A. area. Then, in late June, Great Park Ice reopened.

“It was like I went back to Basic Skills,” Johnson said of returning to the ice after a three-month break. “It was a little rough.”

“Yes. As soon as I stepped on, I felt like my blades were mounted wrong, like my boot was the wrong size. Everything felt off,” Calalang agreed. “You just had to get used to it again.”

“We’ve known them all for a really long time,” Johnson noted. “We always enjoyed being at competitions with them and hanging out. So it feels like they just fit right in.”

Chris Knierim, Alexa’s husband, also continues to work with the group. “He coaches a lot of the younger teams, and also skates with some girls who are looking for partners,” Calalang said. “He’s very happy now.”

Although their training group is back at Great Park Ice, conditions are rather different now than before the pandemic, with new rules and restrictions to help keep everyone at the facility safe.

“They’re really strict with everything. You’ve got to wear face masks all the time,” Johnson said.

“You can only enter [the building] fifteen minutes before your session, and you have to leave right after,” Calalang noted. “The rink is doing a very good job with monitoring everything.”

With the restrictions in place, Calalang and Johnson are focusing mostly on their own skating right now, rather than coaching.

“We have no idea when group lessons are even going to start back up. And the hours are still limited, so we can’t really private-coach and train,” Johnson said.

“I’m coaching a little bit, but I can only coach for one hour after our training day, because that’s when the ice stops,” Calalang added. “Which is fine. During the season, we were at the rink until 7:30 p.m.”

“Our day is a lot shorter now,” Johnson said.

Even with limited training hours, Calalang and Johnson are working hard to prepare for next season. The team recently collaborated with choreographer Cindy Stuart to create a new long program. They will skate to a cover of Queen’s “Who Wants to Live Forever,” performed by The Tenors, featuring violinist Lindsey Stirling. 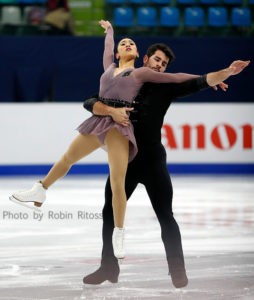 “Our choreographer Cindy brought it to us at the beginning,” Calalang said of the music. She and Johnson liked the piece, but weren’t sure at first if they wanted to use it for their long program.

“However, they kept returning to it after what Johnson described as “many, many hours of listening to other things.” Now, they can’t wait to share the program with audiences.

“It’s really great music,” Calalang said. “It sounds awesome in our arena rink that we have here at Great Park.”

This is the team’s second collaboration with Cindy Stuart; she also created last year’s long program to “You Are the Reason.” Stuart is based in Los Angeles, so it was easy for Calalang and Johnson to work with her in person on the program.

“Cindy is able to challenge us more this year,” Calalang said. “The choreography is definitely more intricate.”

Calalang and Johnson are keeping last year’s “Light of the Seven” short program, choreographed by Benoit Richaud.  They will modify the program to include this season’s required lift and death spiral.

The team may also keep their costumes from last year, as Calalang is fond of the dusky violet dress that designer Lisa McKinnon created for the program. “I love the look of it on the ice,” said Calalang.

Aside from their new long program, Calalang and Johnson have also been focusing this spring on their overall skating quality and on lifts.

“Now that this is our third season together, we want to really nit-pick,” said Calalang. “We’re trying to work on skating closer together, with more intricate handholds.” 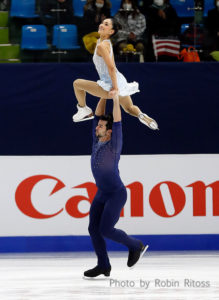 The couple–already known for the quality of their lifts–now have some new lifts to show this season. With so much time off the ice this spring, Calalang and Johnson used the opportunity to work with coaches Jenni Meno and Todd Sand, as well as Stuart, to create some brand-new lifts.

Johnson simultaneously laughed and groaned while discussing the new lifts.

“This year’s lifts are definitely going to be … challenging,” he said with a chuckle.

“Yes. They’re cool. And–I don’t want to brag, but– I don’t think a lot of people would be able to do them,” Johnson asserted.

Although Calalang and Johnson are doing everything they can to prepare, they know that much uncertainty surrounds the upcoming season. The continued spread of covid-19, both in the United States and elsewhere, has thrown the 2020-21 figure skating season into doubt. On July 20, the ISU announced the cancellation of the Junior Grand Prix series this season. The skating community now awaits word about the senior Grand Prix events.

“We’re still training like there’s going to be competitions,” Johnson said. “Because we don’t know if there are or are not.”

“We’re just going to keep training like there’s senior B events, Grand Prixs, Nationals. Because as far as we know, there is,” said Calalang. “And I’d rather have us prepared than not prepared.”

“It’s out of our control,” Johnson agreed. “So we’re just going to focus on ourselves and train away. And we’re going to do some local competitions when they’re available.”

Calalang and Johnson said that U.S. Figure Skating is trying to help skaters stay motivated and in the loop.

“We’ve had Zoom calls, and they’ll touch on the mental side of quarantine, and getting back into training,” Calalang said. “They’re working to keep us connected and together. Because [usually] we would have had pairs camp [this spring], and we all would have seen each other. They’re holding us together from afar.”

After their successful and satisfying 2019-20 season, Calalang and Johnson want to be ready for whatever comes next in 2020-21.

We’re just hopeful and excited for this year, that there’s going to be a lot of events,” Johnson said. “And we can’t wait to see all the fans again.”