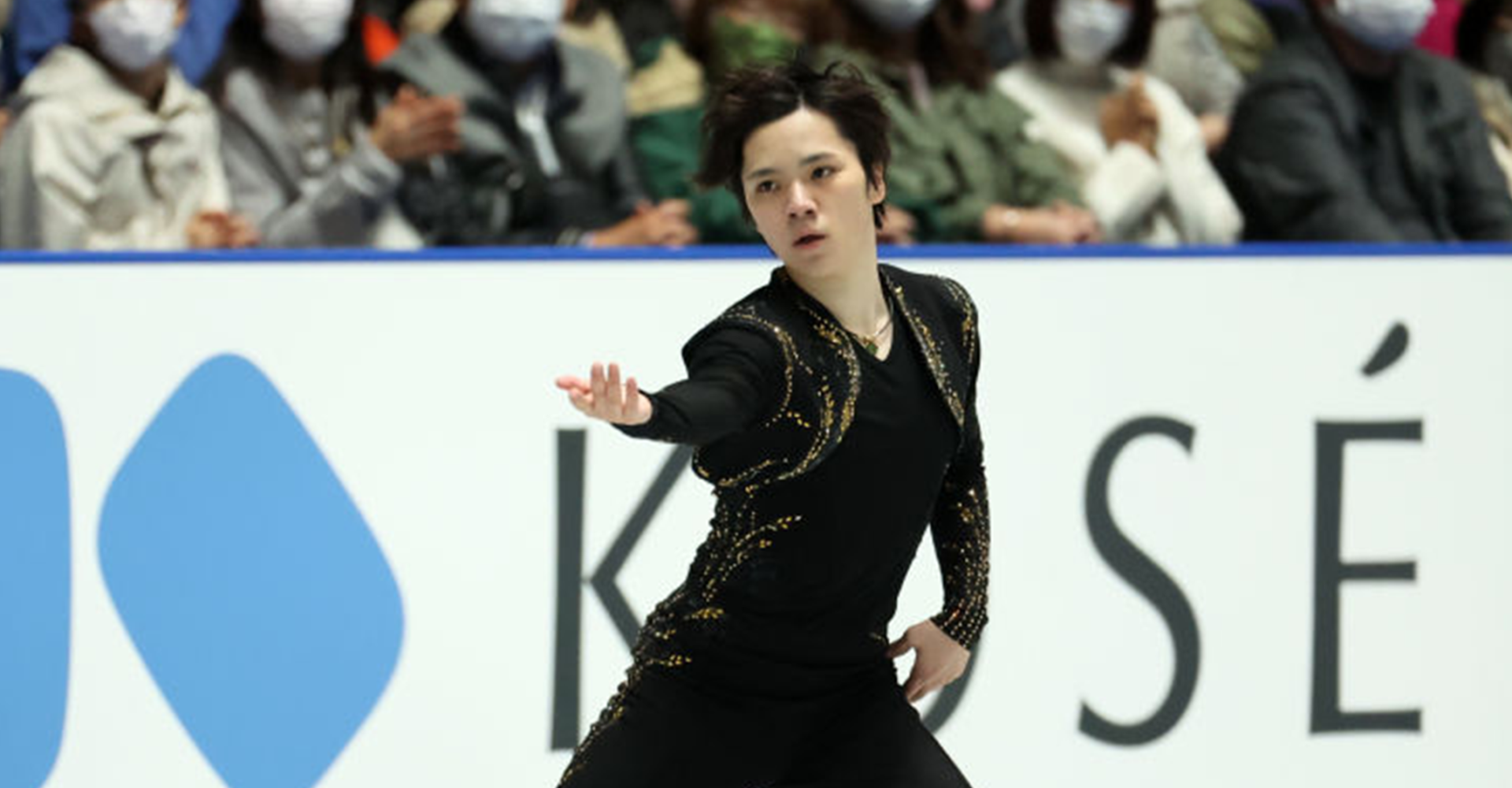 For the second time on Grand Prix Series this season, the two competed against one another to claim the top spot on the podium. Last month, it was Zhou, who was victorious winning his first gold medal on the Grand Prix circuit. The 21-year-old from Palo Alto, California beat out Uno, along with three-time World champion Nathan Chen to win Skate America in Las Vegas, Nevada.

Three weeks later, Uno and Zhou met again, this time at NHK Trophy in Tokyo, Japan. With the absence of two-time Olympic champion Yuzuru Hanyu, Uno was the favorite to win on home soil.

After his short program that included a quad flip and quad toe-triple toe combination, the 2018 Olympic silver medalist and two-time World silver medalist sat in first place with a score of 102.58, a three-point advantage over Zhou. In his “Bolero” free skate, the 23-year-old from Nagoya, Japan executed four quadruple jumps – a quadruple loop, quadruple salchow and two quadruple toes. His only mistake came mid-way through the program when he doubled his planned quadruple flip. Uno earned a season’s best free skate score of 187.57. He would win the gold medal with a total score of 290.15. This marked Uno’s first Grand Prix title since the 2018-2019 Grand Prix season.

“I felt good on the ice, the skate, my movement, my mind. Everything was as during practice, everything went well,” he said following the competition. “It wasn’t a coincidence, everything was happening the way it should. The second half, the flip, if I had done it, it would have been great. But it wasn’t and that means I wasn’t training enough.”

Sitting just three points out of first place heading into the free skate, Zhou was looking to replicate his performance from Skate America to earn his second victory and punch his ticket to his first-ever senior Grand Prix Final. Opening his “Crouching Tiger Hidden Dragon”, Zhou made a mistake right out of the gate by popping his planned quadruple lutz. He regained his focus to cleanly land his quadruple flip, but then received under-rotation calls for his two quadruple salchows and a triple axel. The 2019 World bronze medalist finished the free skate in sixth place with a score of 161.18, but was able to hang on to second place to win the silver medal with an overall score of 260.69.

“I’m very disappointed in my performance. I made a lot of mistakes. I really wish I could have done better and capitalized on my opportunity here, but thankfully this is not the Olympics. I think this is good to get this out of my system now. This is not who I am and not representative of my training.”

Following the short program, Uno and Zhou were asked about competing against one another.  Zhou recalled seeing Uno skate for the first time at the 2015-2016 Grand Prix Final when Zhou was there competing in the junior final, and Uno was competing in his first final as a senior competitor.

“I remember watching him live and being so starstruck and amazed by his incredible skating,” Zhou said of Uno. “Being able to compete at that level, it’s an honor. I’m living out my childhood dream.”

With their placements at Skate America and NHK Trophy, both Uno and Zhou have earned 28 points, which means they will meet again at the Grand Prix Final in Osaka, Japan in December.

After his fifth place finish at Grand Prix Italia just a week before, Korea’s Junhwan Cha earned the bronze medal. In his “Turandot” free skate, the 20-year-old from Seoul landed a quadruple toe and three cleaned triples, but missed the quadruple salchow. He finished fifth in the free skate with a score of 163.66, but still managed to take home the bronze medal with a score of 259.60.
Embed from Getty Images

“I’m a little disappointed, but I’m also happy about it (my free skate),” Cha told the media following his free skate. “I had a lot of mistakes that I have to work on. I really fought through until my program finished. I think I gave everything to the audience, the judges and my family and fans in Korea.”

Finishing just off the podium in fourth place was Russia’s Makar Ignatov, who landed three clean quads – quadruple salchow and two quadruple toes – to earn a personal best free skate score of 166.66 and a personal best total score of 257.20. This marked Ignatov’s second fourth place finish on the Grand Prix circuit this season. The 21-year-old from St. Petersburg finished in fourth at Skate Canada International.

Competing in his first Grand Prix event this season, Italy’s Matteo Rizzo finished in fifth place. His “Two Men In Love” by The Irrepressibles earned a third place free skate score of 171.06. The 2019 European bronze medalist finished in fifth overall with 255.84 points.

“I was a little bit tired at the end,” Rizzo said. “Yesterday and today were very long days, with practice in the morning and competition late at night. But I’m happy with my performance.”

Russia’s Alexander Samarin, who finished the free skate in second place with 171.33 points, pulled up one spot to sixth place with an overall score of 255.56.

“I really wanted to focus on doing my three quads in the (free) program and I was able to do that,” Hiwatashi told the media following his free skate. “I want to work on the jumps where I got the underrotation. I know I’m able to do it in my practice so I need to focus on better execution in the program.”

In the women’s event, Daria Usacheva, the sole Russian after the withdrawal of Alexandra Trusova, was unable to compete at the event after she suffered an injury in the short program warm-up. According to a statement by the Figure Skating Federation of Russia, the 15-year-old suffered a ligament tear in her right leg in the femur growth area and that a full recovery is expected.

With both Usacheva and Trusova out of the competition, this opened up the door for Japan’s Kaori Sakamoto to win the gold medal and to repeat as NHK Trophy champion. The 21-year-old from Kobe executed six triple jumps in her free skate to earn a season’s best free skate score of 146.78. She earned a total score of 223.34.

“On my first and last jump today, I was a little bit at an angle in the air and that got me worried, but my goal of putting out a good free and short program was achieved,” Sakamoto said following the free skate. “To be honest, one month ago it would have been hard to imagine today’s result. This season every competition is very important. I don’t have a big element (such as triple Axel or quad), so I have to make sure to skate clean.”

Initially without any Grand Prix assignments, Mana Kawabe was named to Skate Canada International following the withdrawal of Switzerland’s Alexia Paganini. Kawabe would finish the event in 9th place. The 17-year-old would get a second assignment, NHK Trophy, after the Nov. 5 withdrawal of two-time Four Continents Champion Rika Kihira.

In her free skate, Kawabe landed seven triple jumps. Her only mistake was a fall on her planned triple Axel.  She earned a free skate score of 131.56 and an overall score of 205.44, which is a personal best, to win her first Grand Prix medal.
Embed from Getty Images

“After I missed my Axel, I was able to change my mindset and focus on something else. I achieved my personal best, so I’m very happy about that,“ Kawabe noted. “At Skate Canada, my free skating gave me confidence, especially the fact that I could focus on the free. I was able to do that in the short program in this competition. Little by little my (triple) Axel success rate is getting better.”

Korea’s Young You earned her second bronze medal of the Grand Prix season. In her free skate, You missed her opening triple axel, but went on to land five clean triple jumps. The 2020  Four Continents silver medalist earned 135.52 points in the free skate and earned a total score of  203.60. This is You’s second Grand Prix medal after her bronze at Skate America last month.

“Like yesterday, I am disappointed in myself,” You said. “Next time I want to concentrate on my triple Axel and I don’t want make these mistakes. Until now I had a lot of competitions and until Nationals I don’t want to get an injury, take care of my body so I can do well at Nationals and get to the Olympic Games.”

Two-time U.S. Champion and 2020 World Junior bronze medalist Alysa Liu missed the podium, finishing in fourth place with a total score of 202.90. The 16-year-old landed her triple Axel, which was a quarter shy of the full three and a half revolutions. She cleaned landed six other quads.

“I feel really good about my performance today,” Liu said after her free skate. “I’m really glad that I went for everything, that was my goal. I didn’t feel nervous. I enjoyed my program.”

Korea’s Eunsoo Lim ranked fifth with a total score of 186.68 and Japan’s Rino Matsuike moved up one spot to finish sixth with 186.17 points.

Like the pairs event, the winners of the dance event were also the reigning world champions. Victoria Sinitsina and Nikita Katsalapov took home the gold medal in their first Grand Prix event of the season. Two-time World medalists and U.S. champions Madison Chock and Evan Bates earned their second silver medal of the Grand Prix season to qualify for the Grand Prix Final. Great Britain’s Lilah Fear and Lewis Gibson claimed the bronze. This marks Fear and Gibson’s second Grand Prix medal. 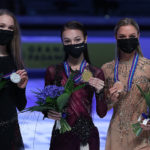 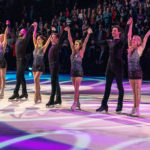 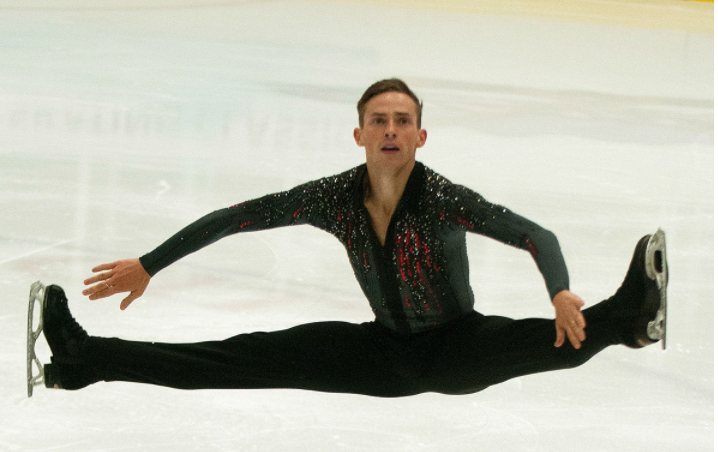