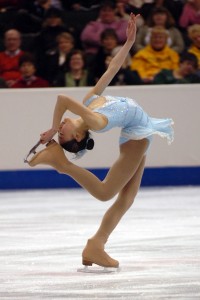 Mirai Nagasu could not forget about the short program. With the Cup of China gold medal within her grasp after a first place showing in Friday’s short, 2008 U.S. Champion Nagasu was overwhelmed, and ultimately placed fifth with 155.38 points following multiple mistakes in the free skate Saturday.

“I just want to go home and practice,” Nagasu said to her coach Frank Carroll while waiting for her marks in the kiss and cry. She received 93.18 for her sixth place free, which had five downgraded jumps, two edge calls and a fall.

Rachael Flatt finished the highest of the three American ladies competing in Beijing. She placed fourth overall with 157.71 following fifth place finishes in both programs. Beatrisa Liang (131.39) dropped from ninth to 10th.

Skating to a “Rhapsody on a Theme of Paganini” by Sergei Rachmaninov for her free skate, two-time U.S. silver medalist Flatt, who was fifth at the Worlds last season, landed five triples, although both flips received a warning for the wrong take off edge. Flatt performed Level 3 spins, Level 3 footwork and a Level 2 spiral sequence.

Both of Liang’s Lutzes received a warning for the wrong take off edge.

Flatt competes next at Skate America, Nov. 12-15, in Lake Placid, N.Y., while Nagasu is assigned to Skate Canada, which is Nov. 19-22 in Kitchener, Ontario, Canada. Both are looking to improve on their performances in Beijing as U.S. Figure Skating will use the Grand Prix season to help determine the 2010 U.S. Olympic team.

The men’s free skate, pairs free skate and the free dance follow the ladies final at Cup of China.

Olympic bronze medalists Xue Shen and Hongbo Zhao of China won the pairs short program with 72.28 points. In their first competition since 2007, the three-time World Champions nailed a beautiful side-by-side triple toes and a throw triple loop. Shen and Zhao also performed a triple twist, a one-armed lift as well as two Level 4 spins and a Level 4 death spiral.

Americans Amanda Evora and Mark Ladwig are seventh with 48.02.

After the compulsory dance and the original dance, five-time U.S. Champions Tanith Belbin and Benjamin Agosto (98.66), the reigning World silver medalists, are ahead of the field. Russia’s Jana Khokhlova and Sergei Novitski (92.78) are second and Federica Faiella and Massimo Scali (89.96) of Italy and third.

World Junior Champions Madison Chock and Greg Zuerlein, reigning U.S. Junior Ice Dance Champions, are competing in their first Grand Prix event. They finished seventh in the compulsory and improved with a sixth place showing in the original.